Last week I wrote about how unhappy I was with the crummy sewing job I did on the liners. So I decided to hand sew them by back stitching. The result was much better although it was time consuming.

By the time I got to this stage in the game I was feeling pretty proud of myself until I tried the mitts on. Now these are for my daughter who has thinner hands than me, but even for her the fingers felt a little snug. I’m not sure why this happened because initial fittings were fine. The fingers felt good. Whatever happened, error on my part or knitting gremlins, I had to figure out something.

I went from fingers in the mitts to no fingers.

Just as in life, knitting doesn’t always go the way you thought. Hopefully everything turns out though.

Overall I’m happy with the final project. A few things of note for the next pair of lined, flap mittens I make:

Merry Christmas, happy knitting and I’ll see you next year!

The steps were pretty easy to create the mitten liners, however my gut told me that there should be more of a seam allowance. My thought being you can trim the excess fabric after sewing. But the video says you don’t need much seam allowance. I should have listened to my gut.

So I use my paper pattern and traced it onto layers of fleece – leftover from a Halloween costume.

This next step I was dreading. The sew machine and I are not friends We are not on speaking terms and every time I try to use the thing bad things happen. This wouldn’t be an exception.

So the seams were so small that the fabric kept bunching up or I would miss a section and have to sew back over it. I swore, swore a lot and maybe even cried a little. These crummy liners took a hour and half to sew.

I wasn’t happy with them and decided to try something else which I’ll tell you about next week.

One thing I find annoying about making mittens is that once the weather gets below a certain temperature they don’t keep your hands warm anymore. The best fix for this is a fleece liner. Also using smaller needles then the suggested ones and adjusting your gauge helps. The tighter stitches mean less cold can get through.

I did both for these mitts. I found this video on YouTube that was quite helpful.

More of the mitten adventure to come next week…

I’ve been away for months and I haven’t been knitting. It’s sad and makes me feel empty. I haven’t been feeding my passions and working a lot. Don’t get me wrong, I love my new company but working full time again, plus maintaining a side gig takes up all my time and energy.

Recently I’ve started to slowly get back to my knitting partly because everyone in the house needs new mittens. I meant to make my youngest daughter mittens with flaps last winter. These mitts are perfect for both my girls since they have to take a city bus to school. They can easily get their bus card out of their backpacks and not have to take off their mitts to do it.

I don’t have a pattern for these mitts. I’ve been making them up as I go using measurements I took from Gwyn. I’ve messed up the flap twice now, but I think the third time will work. In the photo I’ve folded the bottom of the flap to the length it should be – I made it a good inch too long.

My intent is to line these with leftover fleece from Gwyn’s Halloween costume. I have a ton of magenta fleece left and I think this will be a good way to use it up.

I can’t make promises of keeping my sad, lagging blog up to date, but will make better efforts to post something every month. 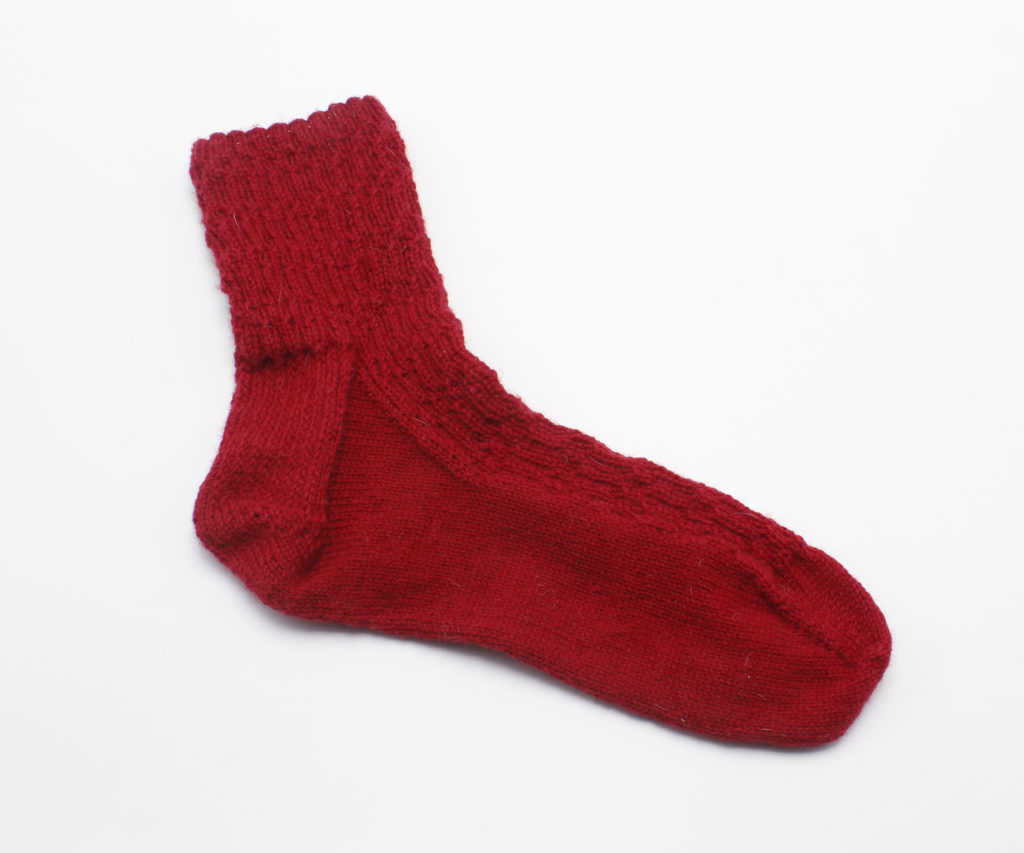 As part of my graphic design business I decided to expand my services to product photography. I was so excited to get my light box kit yesterday. I’m ready to go!

The Christmas season was so busy that my twisted rib sock didn’t get worked on. I decided about 10 days before Christmas to knit a pillow cover for my niece for Christmas. I got it done, but I forgot to get some images.

I did finish the first sock as seen here (and photographed in my new studio):

If you are a maker and want high quality, beautiful product photography which helps sell your goods, you can contact me through Blue Bug Design.

It’s been a whole month but I’m back. I know I said the next project would be a weaving one but I’d like to share this guy first. My husband bought me some lovely yarn for Mother’s day in red and orange. There was some hinting to make socks. So I’m making one pair for him (in red) and one pair for me (in orange). In my typical way I’m making the pattern up as I go. I have a basic sock recipe I follow using foot measurements and gauge. The rib is twisted every 8th round and 11th round which comes from a pattern stitch book I purchased a few years ago.

I find it funny that I’m such a pattern junkie, much more than a yarn junkie, but more often than not I end up creating my own pattern. I can’t explain it.

As promised here is my latest woven belt. I’m really happy with the metal belt ends I purchased. Unfortunately I think the D rings are a bit heavy for a belt. They seem to be better suited for something heavy duty like a bag. Also the belt end does fit through the D rings, but I think it would have been better to have slightly larger D rings so the belt end would fit through more easily. I’m learning and loving it!

This year I had promised myself I would blog once a week with a mix of projects and interesting knitting related articles. Here it is Fall and I haven’t been able to do that. I’m starting to think getting it together isn’t possible. I have so much going on that I can’t seem to stay focused or set goals. You would think by the time you were middle aged you’d have it figured out, but nope, not me. It’s a weird time for me. I feel like I’m transitioning. I just not sure what I’m transitioning into. Thank goodness I have my fibre arts to keep me sane.

I’ve been weaving but I’ll save stuff about that for my next post. Today I wanted to share a photo of my final Kitchen Mat.  I was so happy to finish it just a few days before Thanksgiving (Canadian). Originally I was worried about it sliding but it’s so heavy it stays in place pretty well. Of course my dog, Patches thinks it great to smush up or to lay on. 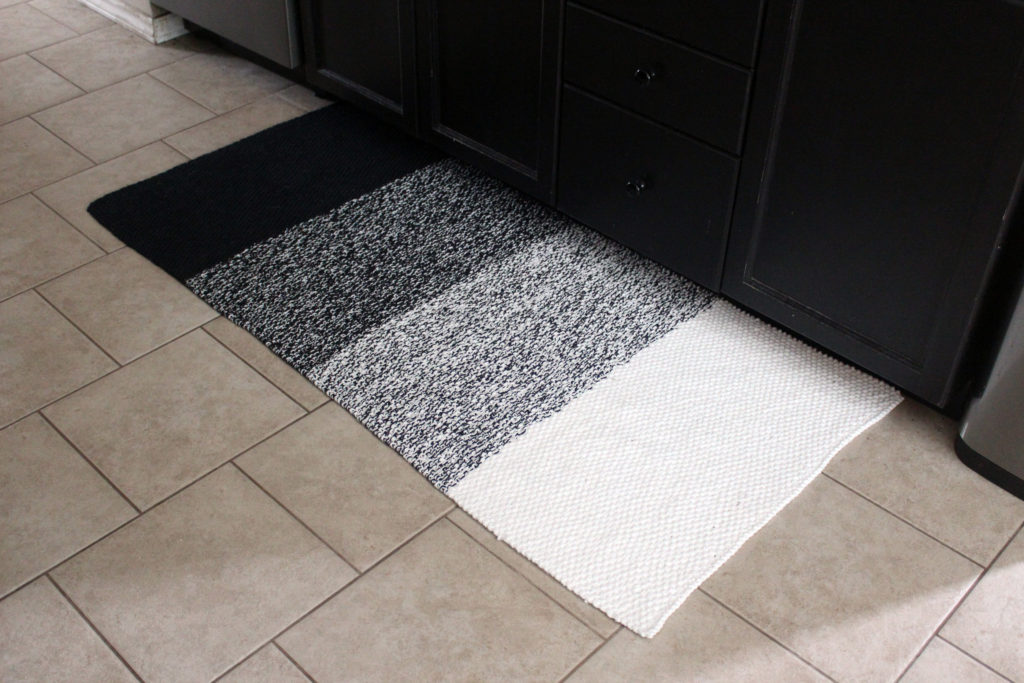 Even though I love this mat I’m not sure I’d make it again. It uses a ton of cotton yard because it’s three strands held together. And it was hard to knit up the last (white) section because it  it weighs 3.5 lbs. On the upside I have some left over yarn to make matching dishcloths.

The past week I started weaving bookmarks I hope to sell at craft shows and on my Etsy store. 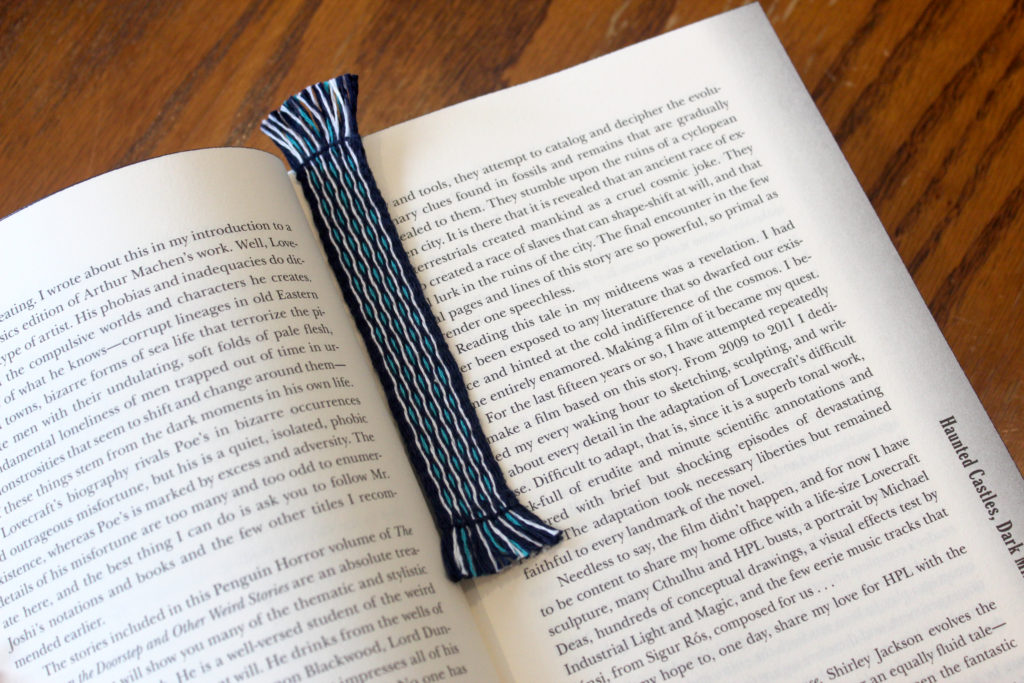 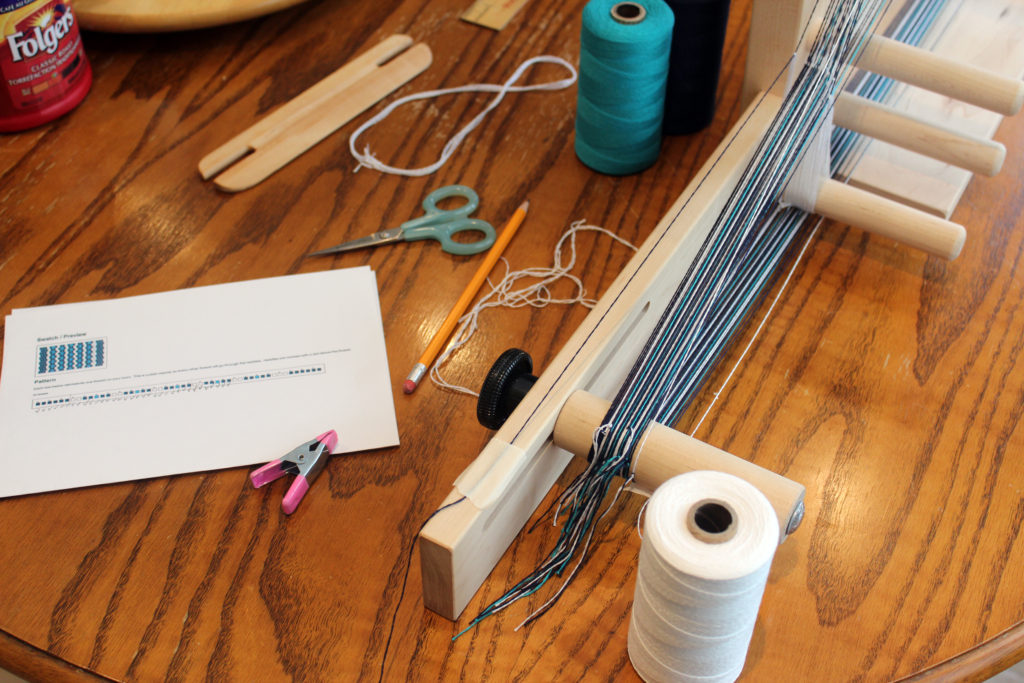 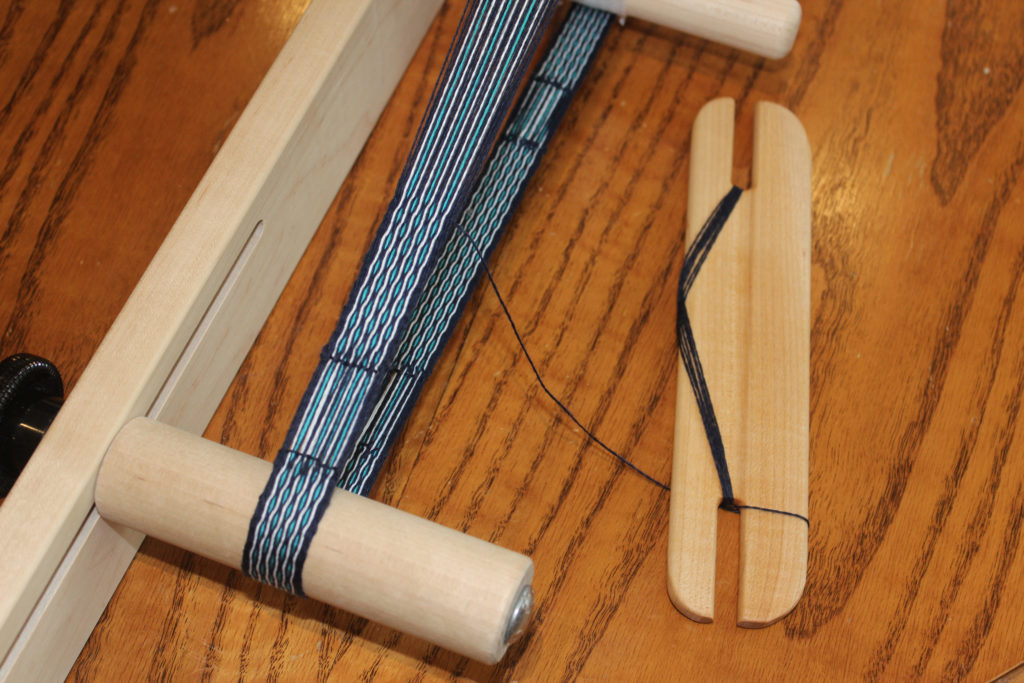 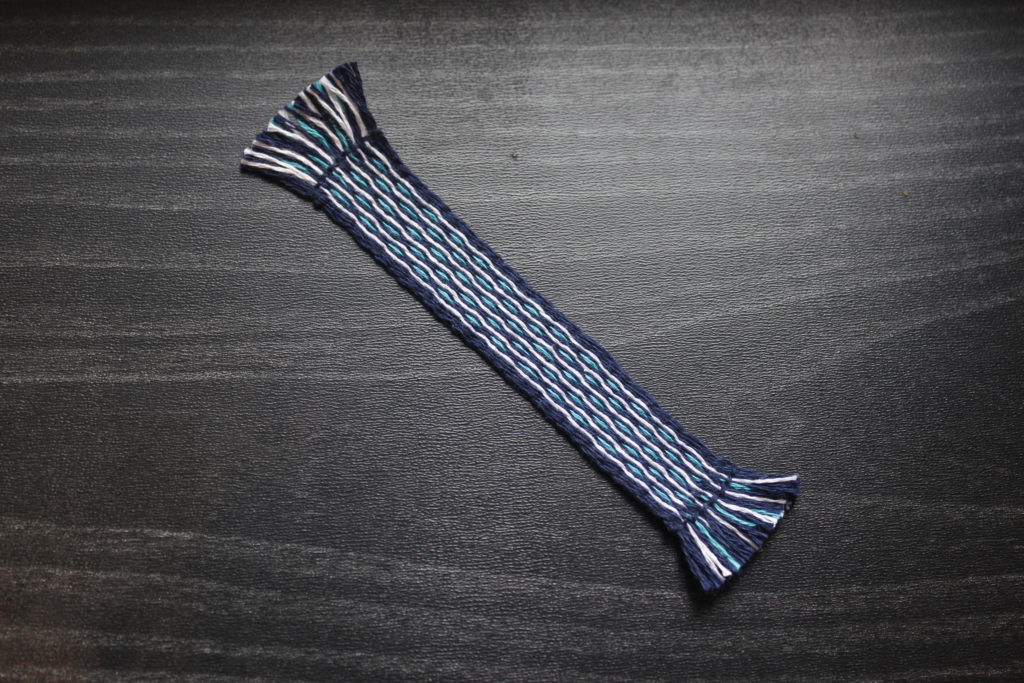 My kitchen mat has been put on the back burner because of  all the weaving I have been doing. I’ve worked on it a bit in the evenings but it’s hot and so heavy I usually put it down after a few rows. It’s not the ideal project for the summer. Fortunately I only have around 65 rows to go. 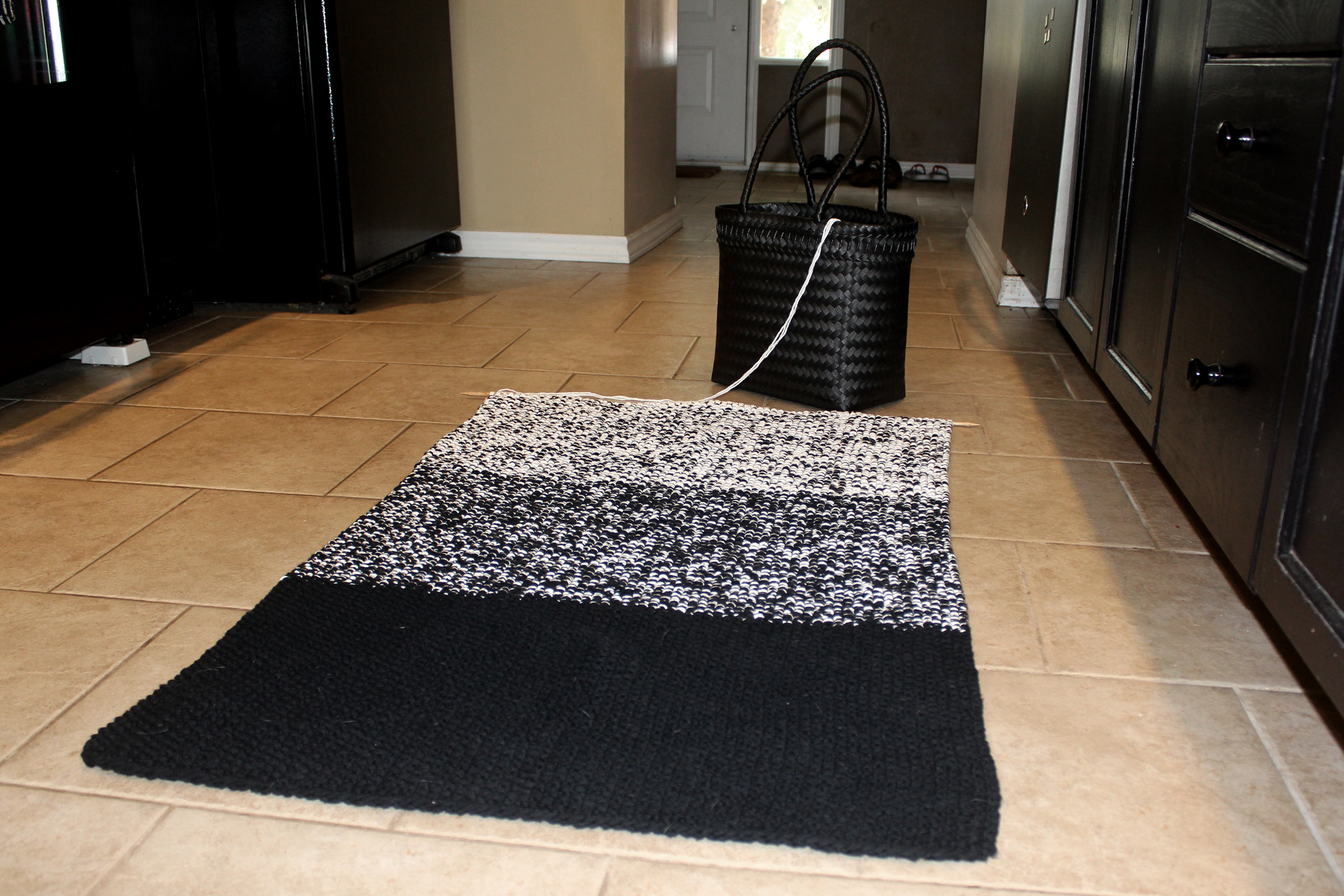 All that’s left is the white section 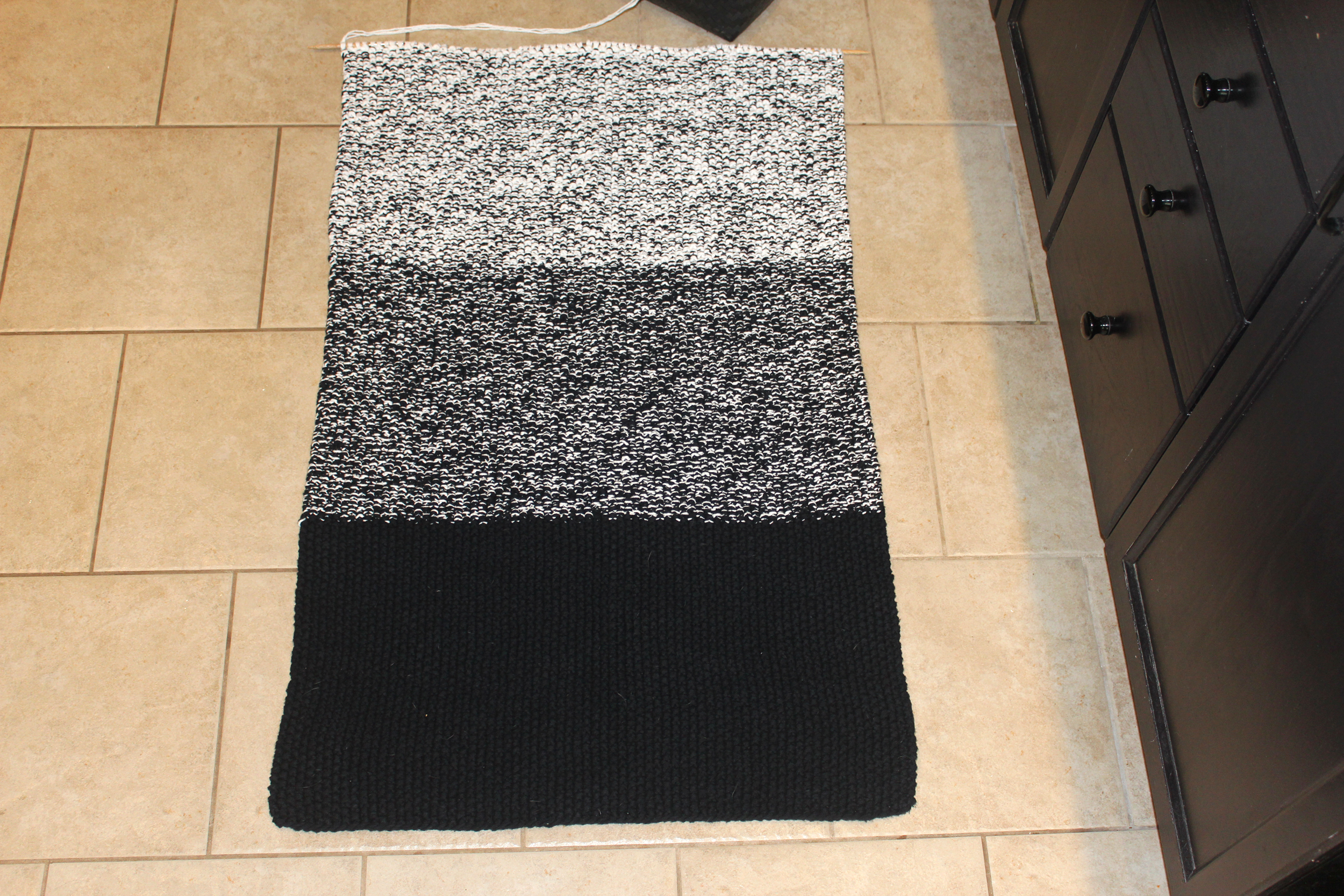 Since my graphic design business is lagging I’ve decided to build stock of handmade products to sell this fall – just in time for Christmas. I’ll share what I’m doing next week. The items are woven. The feedback about them from friends and family has been encouraging which makes me feel good about making more.

I’m also looking for some seasonal work to fill in the gaps. It’s so difficult to find graphic design work or business out there, it’s disappointing. There has been no lack of effort to find work or new clients on my part. Sigh.

The upside is with my extra time I’ve been focusing more on making things. And maybe that’s what I’m meant to do. Make beautiful and useful things. 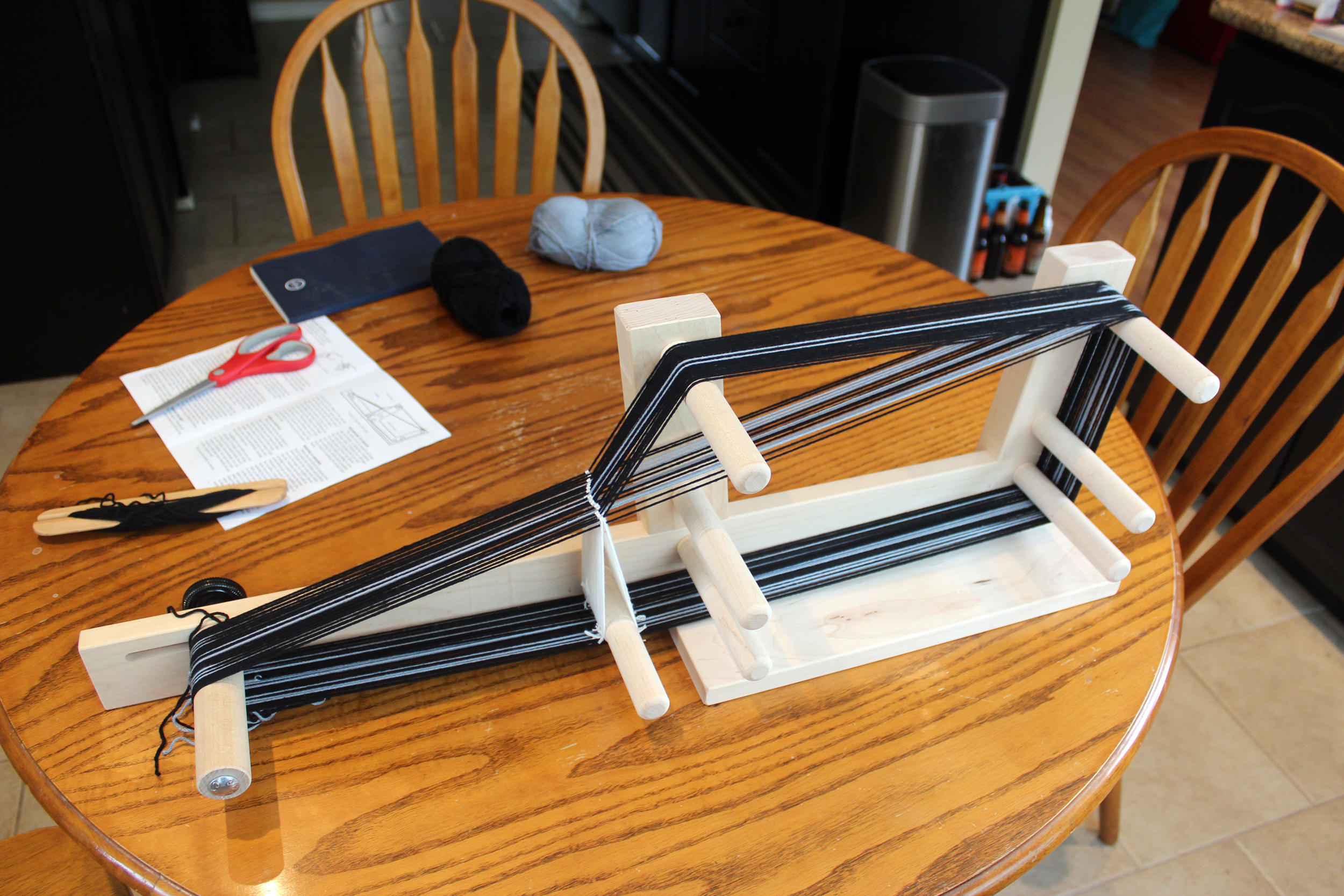 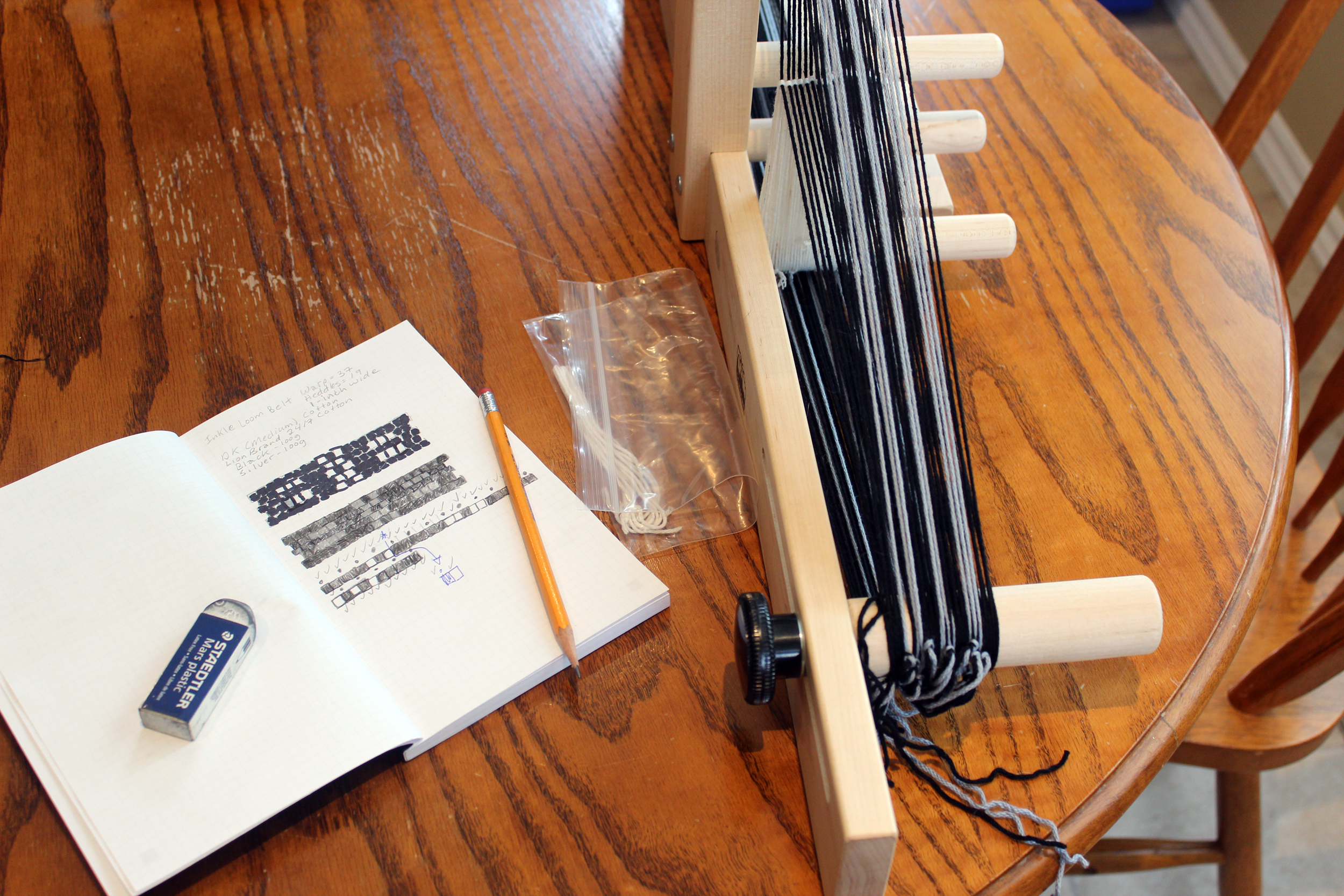 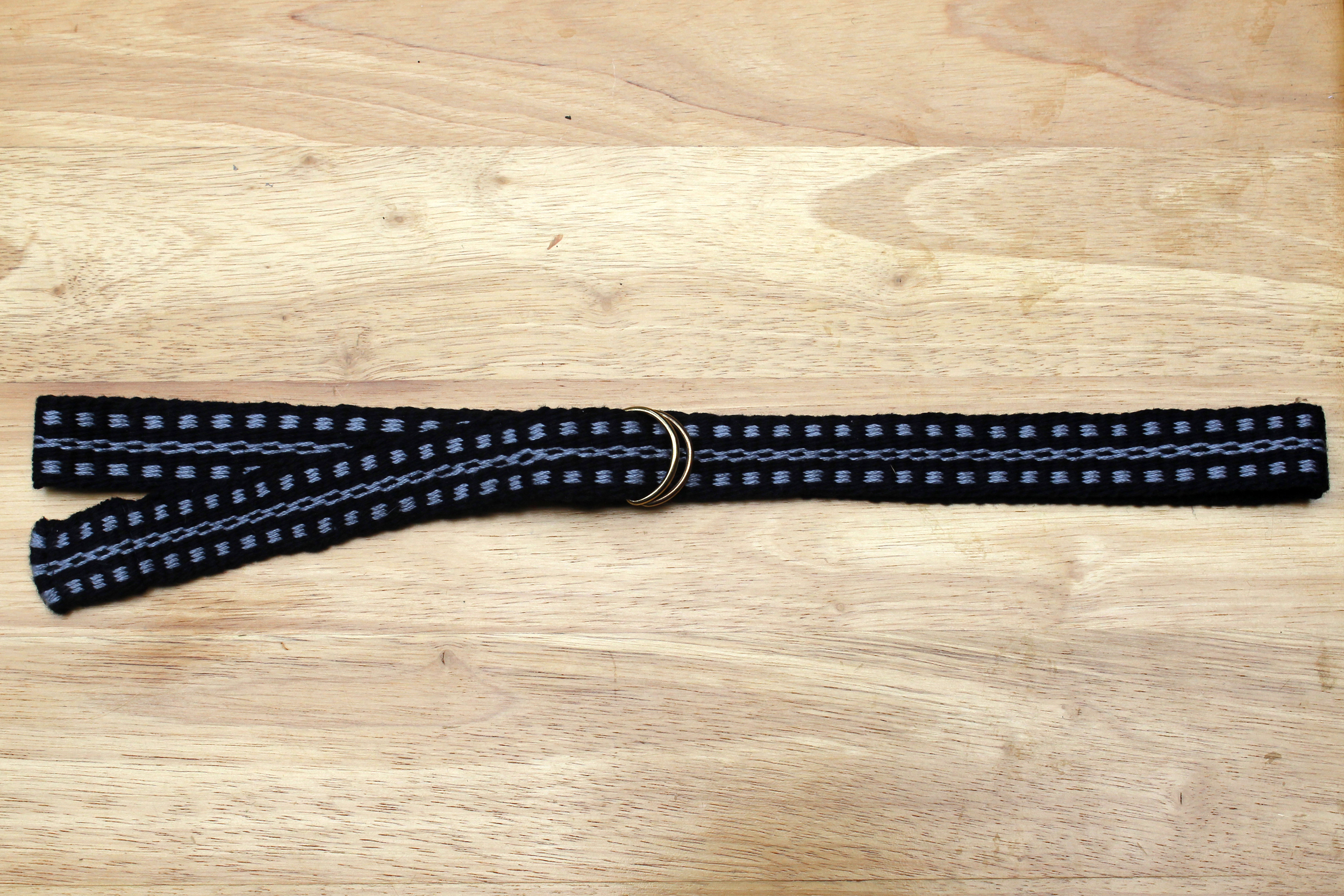 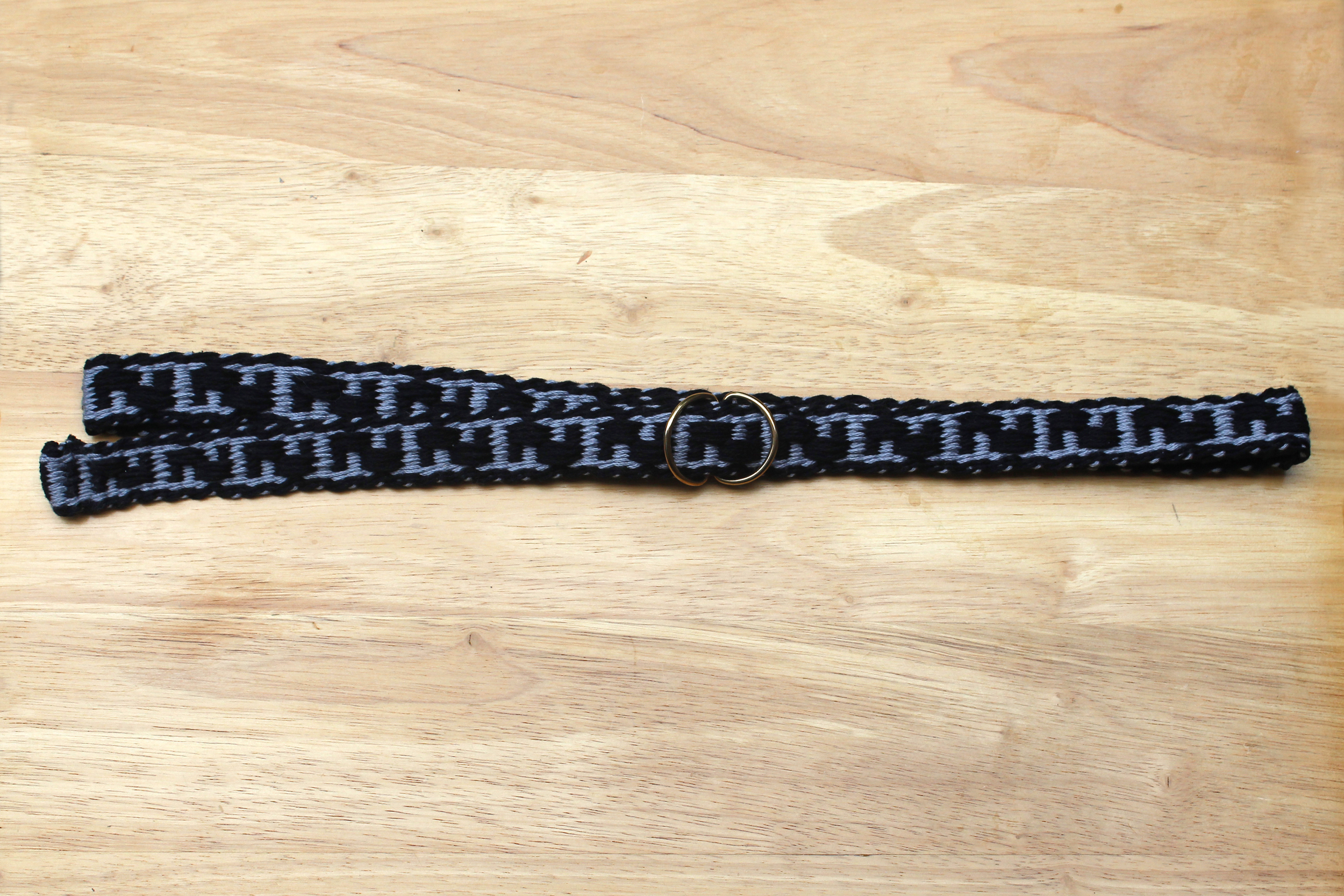