Here are the final wound up skeins of Kool Aid dyed wool. So pretty! 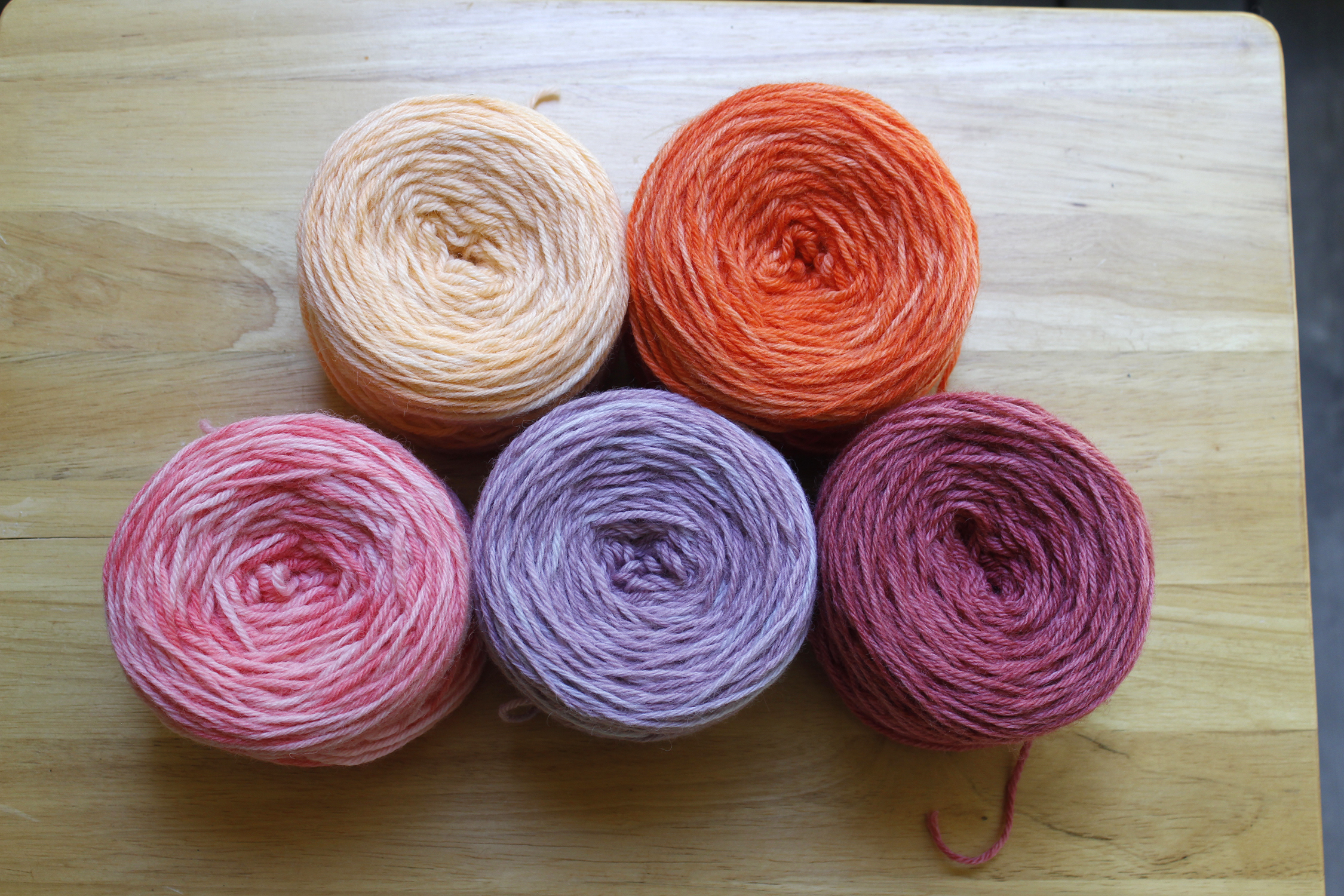 I’ve wanted to do Kool Aid dyeing for years. Today the girls and I tried it out. Things got tricky right away when I realized that no-one seems to sell the powdered form of Kool Aid anymore. So I improvised and used the liquid concentrate instead. First thing I discovered is that if you want an intense colour you need to use about half a container of the Kool Aid concentrate. Our first few skeins came out pastel – pretty but not what the girls had hoped for. I think I will re-dye them at a later time. Second thing is wear some gloves – I didn’t and now I have stained fingers and smell like fruit punch of some kind. 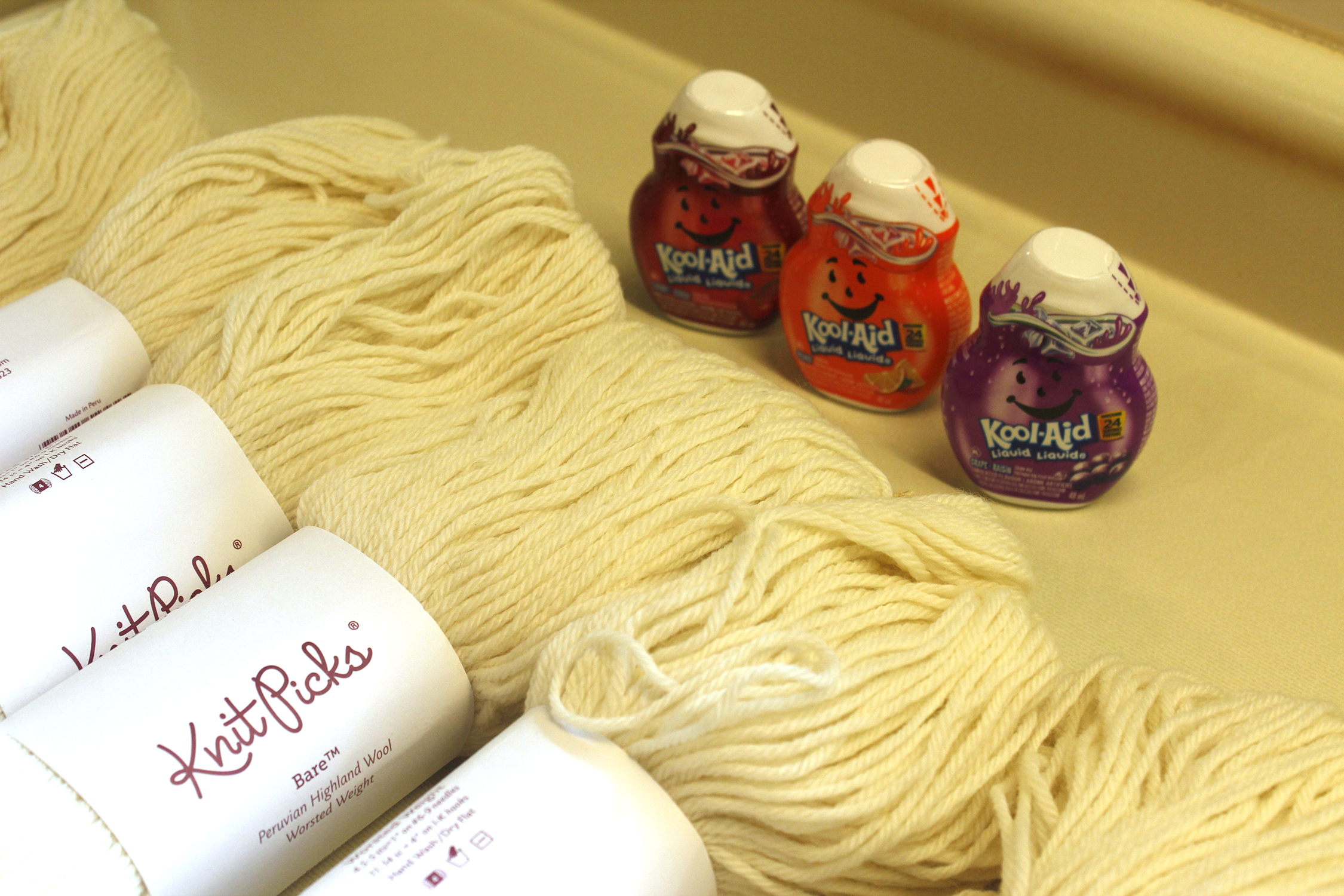 Step one – white, 100% wool yarn and either powdered or liquid concentrate Kool Aid. 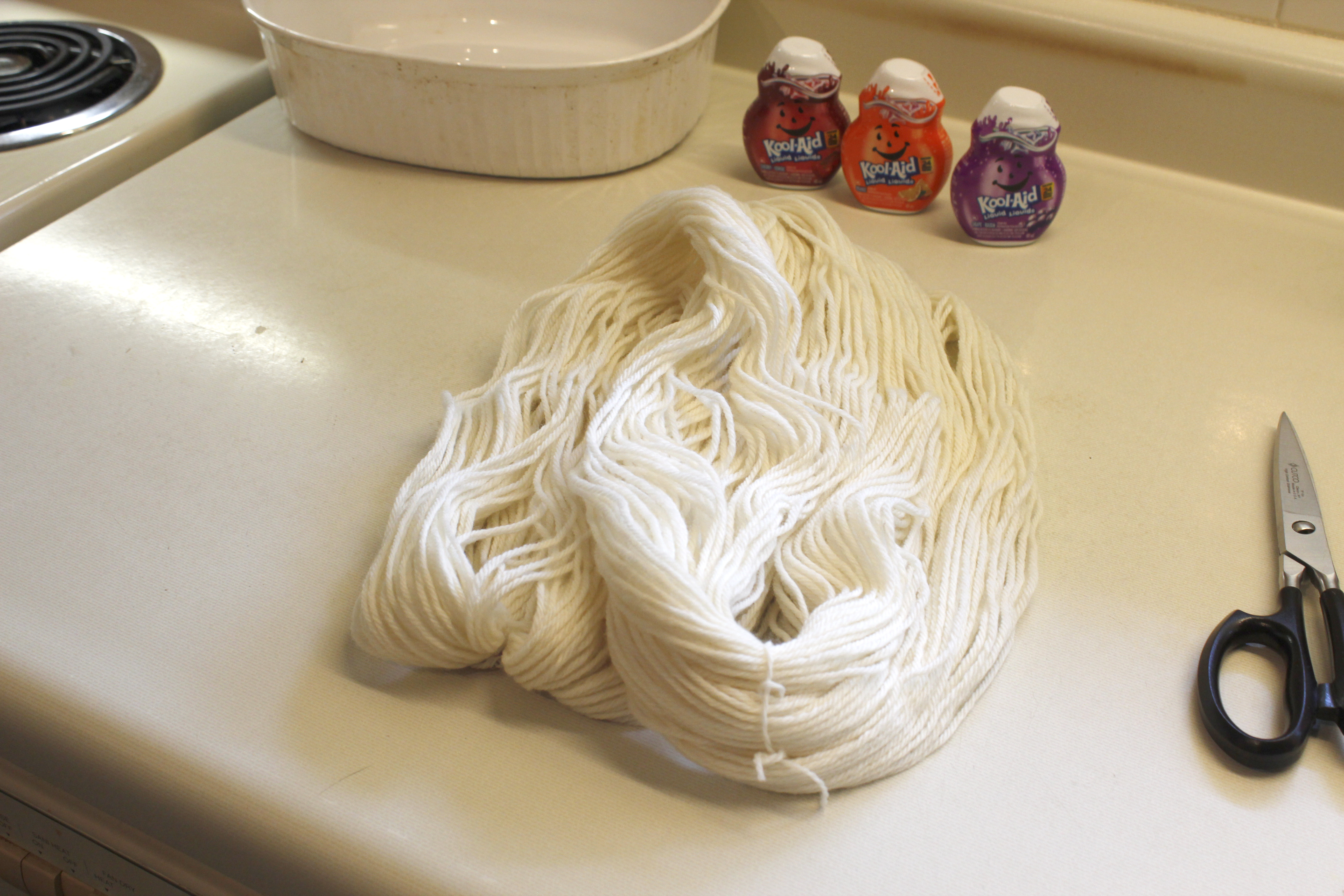 Step two – prepare the skein – make sure it’s loosely tied on either end so it doesn’t tangle. 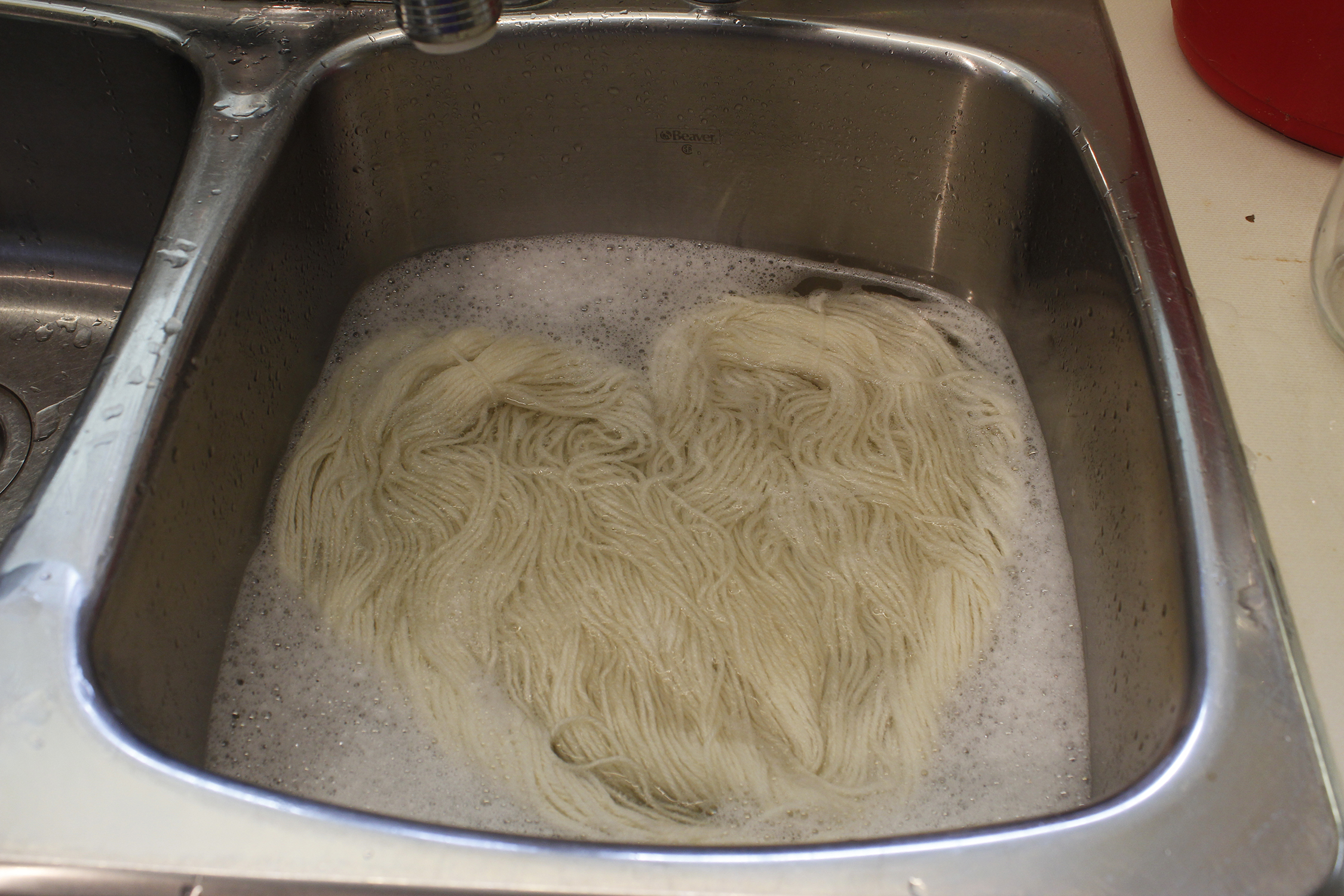 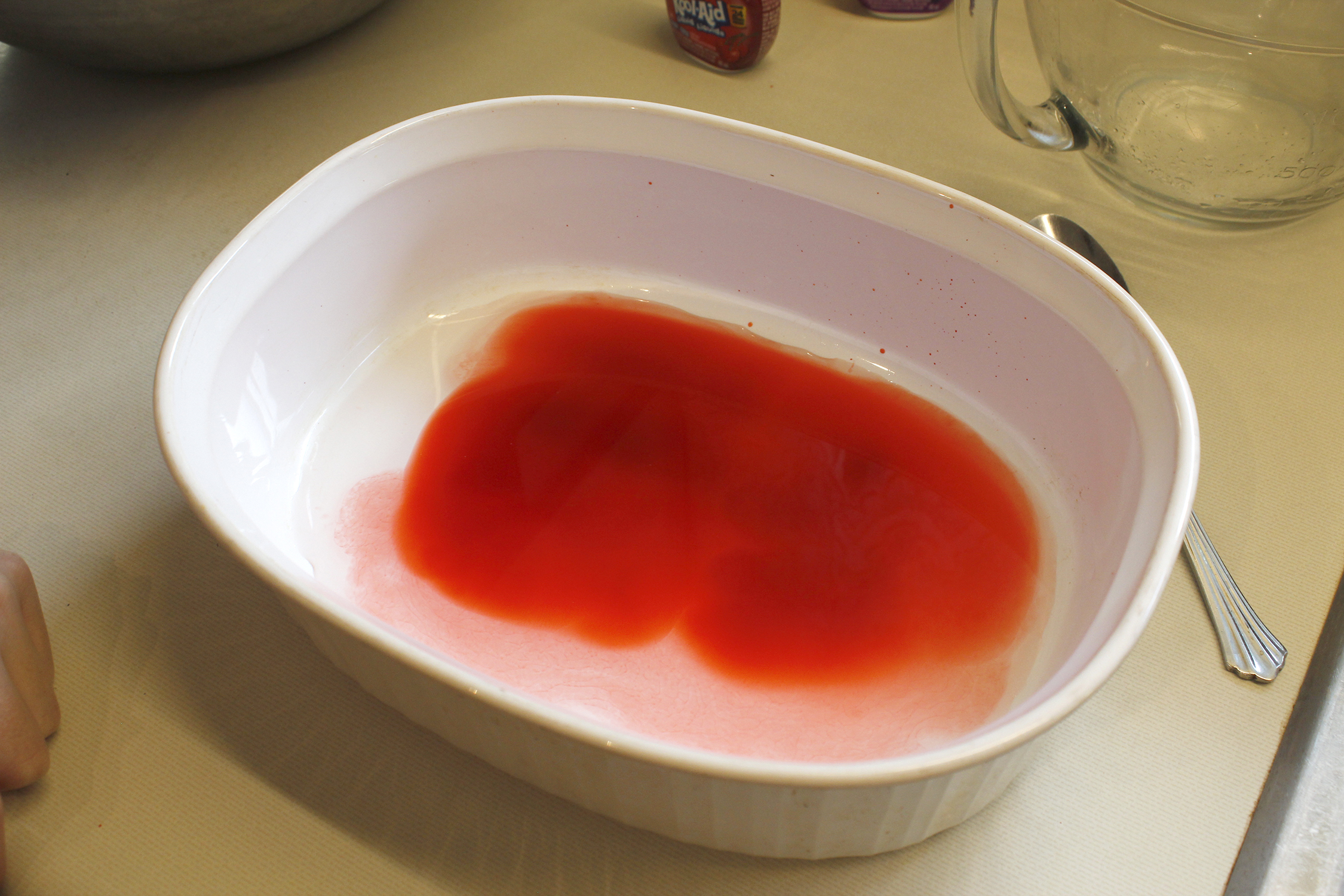 Step four – pour dye into a mircowave safe container – use more for intense colour (use about half a liquid container or one full powder packet). 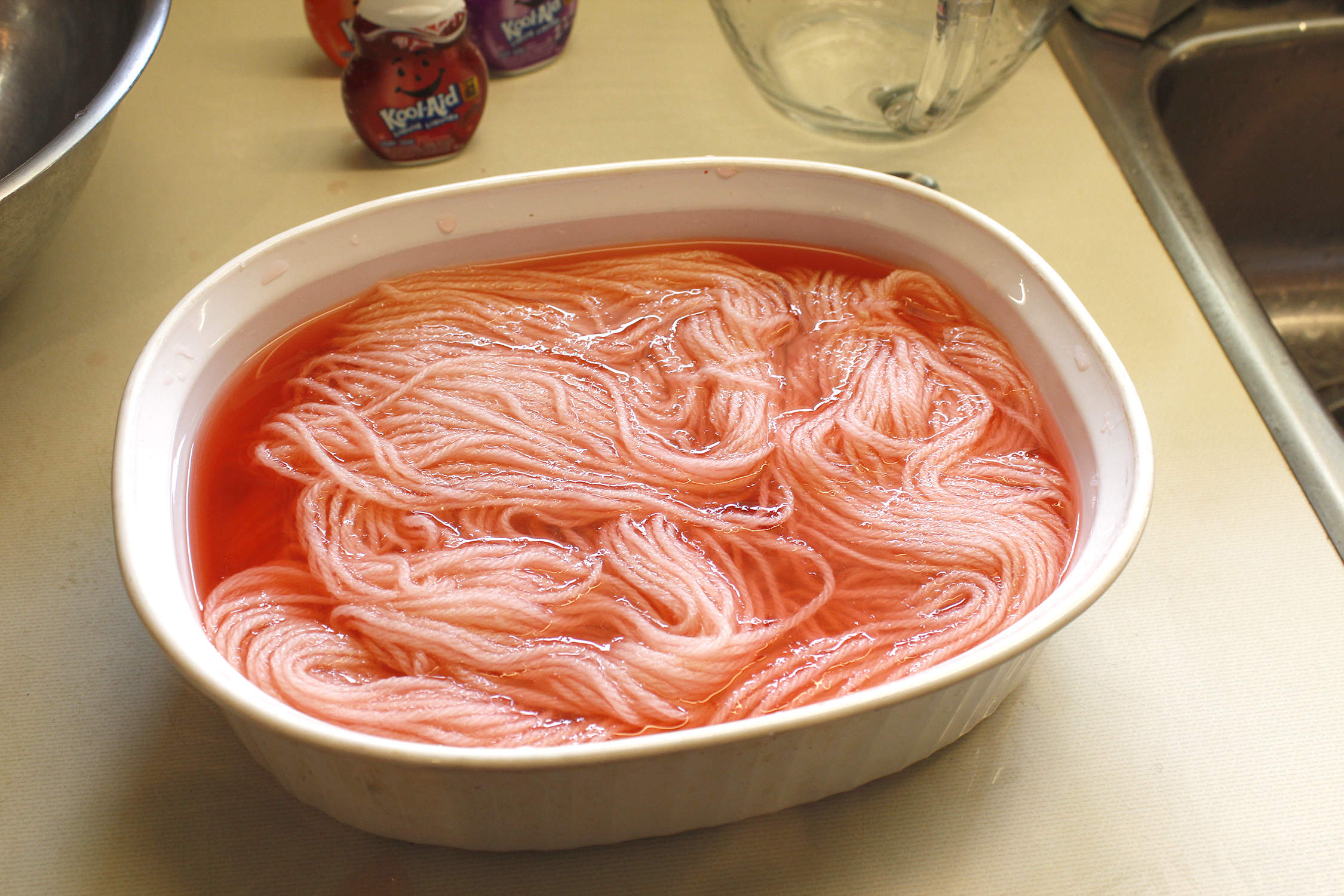 Step five – add water to cover the skein – I think I have a bit too much water here. Less would be better. 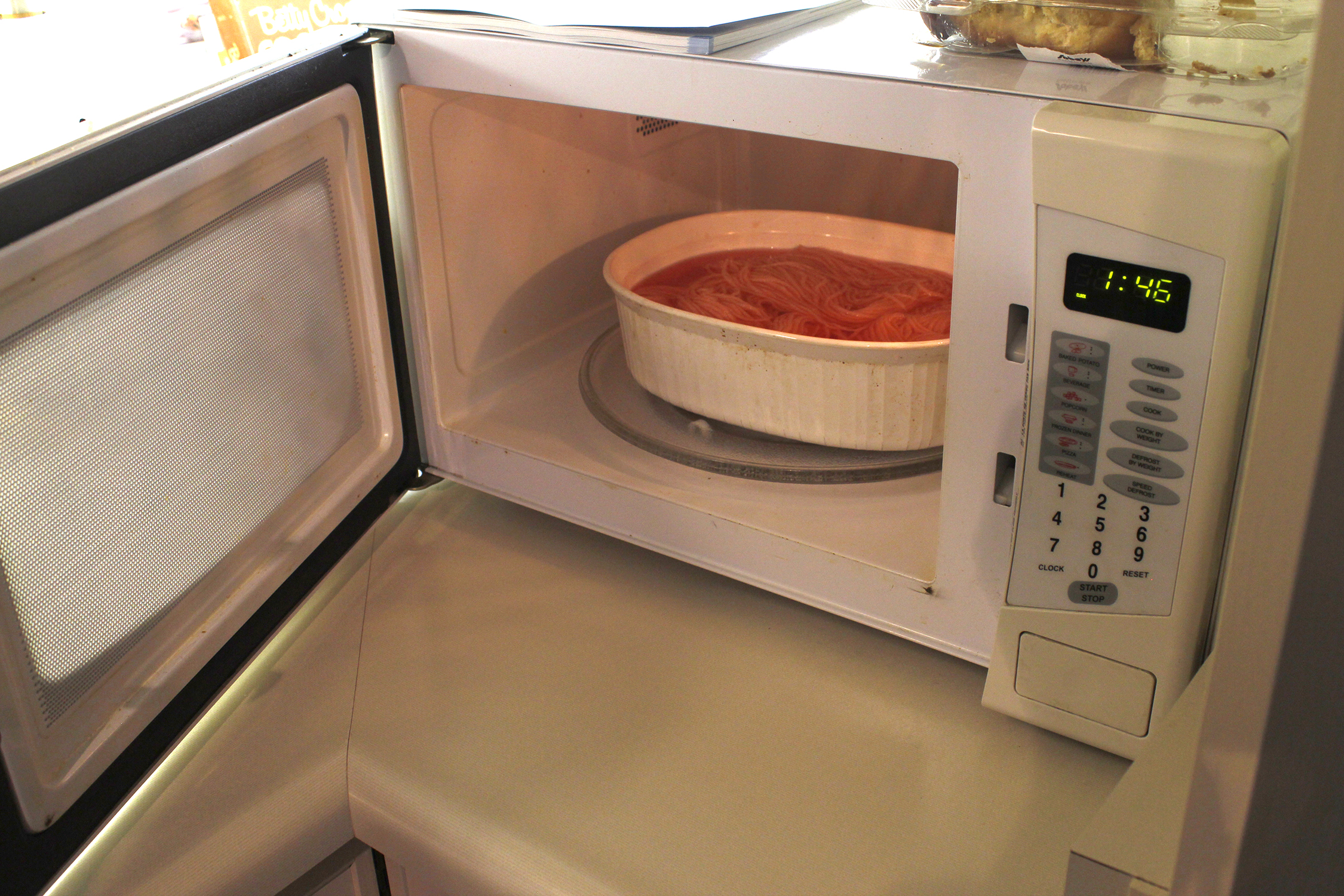 Step six – microwave for 2 minutes, let rest for about 2 minutes – repeat this a couple times until you see the water becoming clear. I found 3 repeats to be enough. 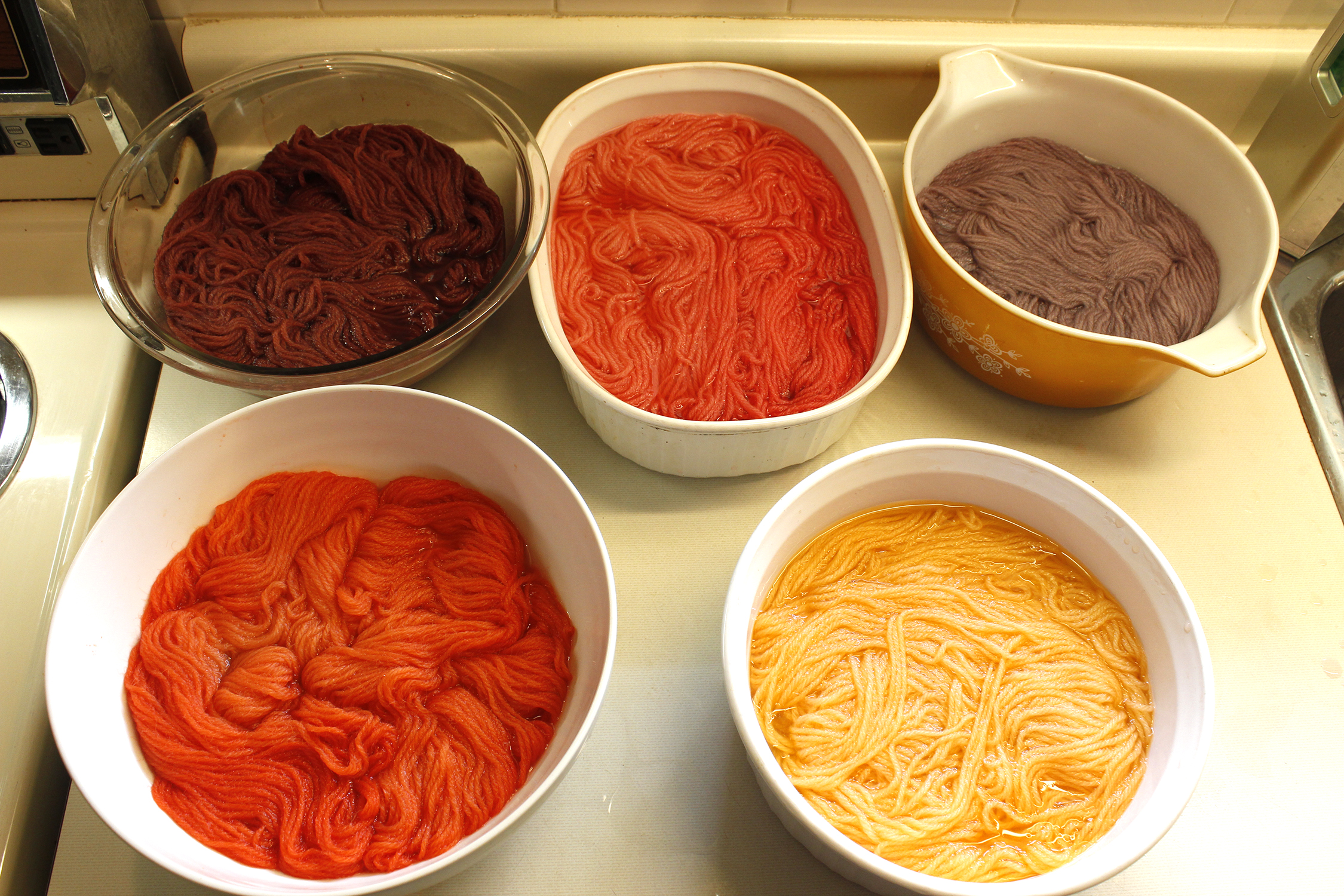 Step seven – let sit until the yarn cools to room tempature or so. Rinse in water that is similar to the tempature of the yarn so it won’t felt. 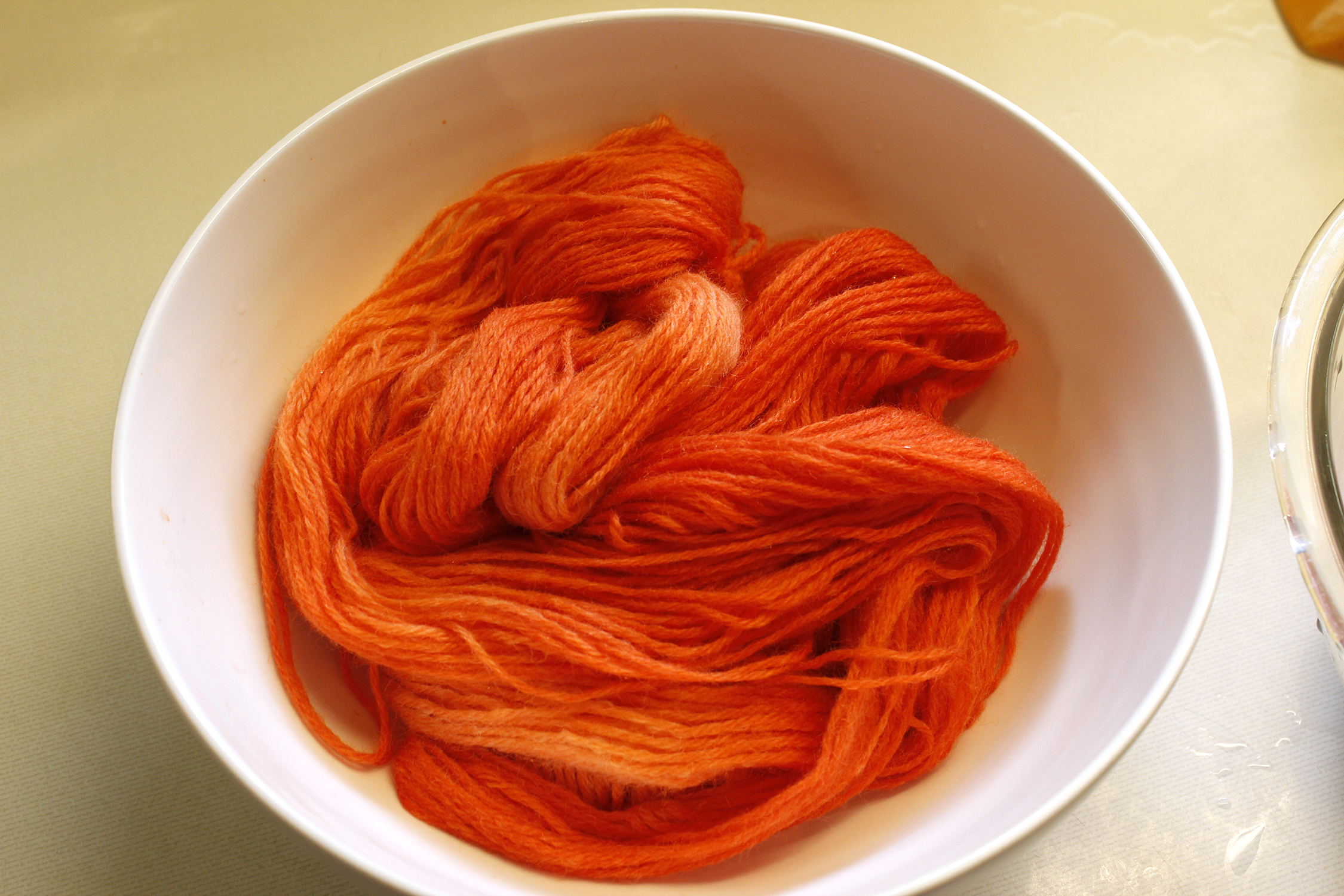 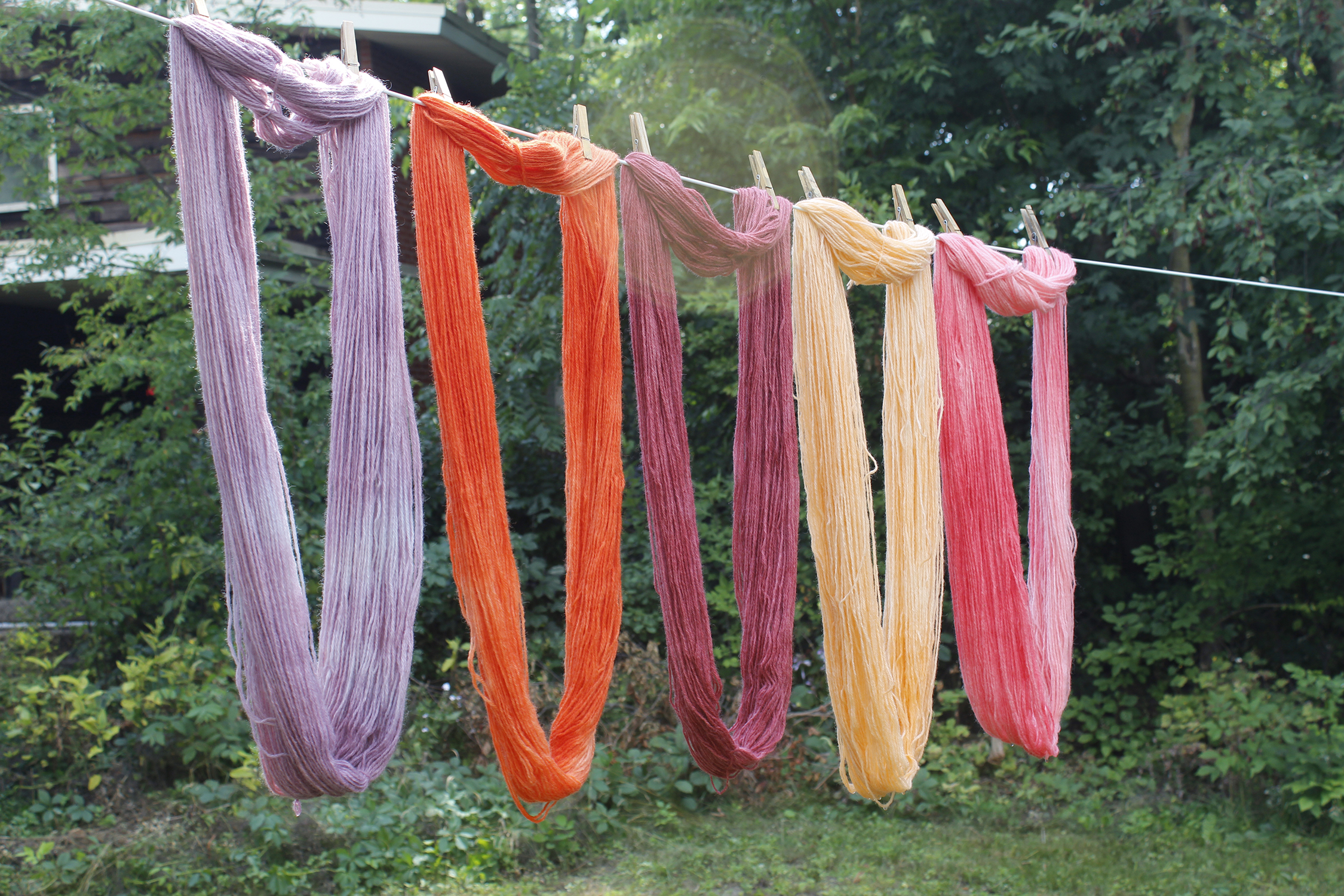 Step nine – Hang to dry. Wind into balls and knit away. 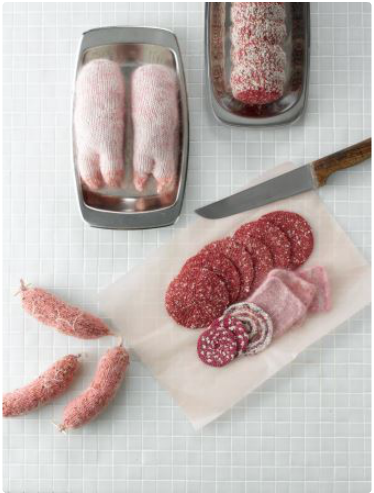 Hello guys. Sorry I’ve missed a post or two. I’ve been distracted with my Dad’s hip replacement surgery and a few other personal issues. Nothing big or to be concerned about.

Last week I bought a copy of Vogue Knitting as a treat. And love the article about knitting sculptor, Dominique Kaelhler Schweizer, a.k.a Madame Tricot. She knits these amazing sculptures of meat, cheese, and other foods. They are as disturbing as they are beautiful. As a trained fine artist I felt so inspired by this. In the past I combined some of my fibre skills into my print making. I miss those days of art – sigh.

What non-traditional object d’art would you find most interesting to create?

I found it very interesting and now I’m wondering if I should add the material my needles were made of when I created my pattern. I guess the most important thing to remember is when fit is of the utmost importance check your gauge and adjust needle size accordingly. 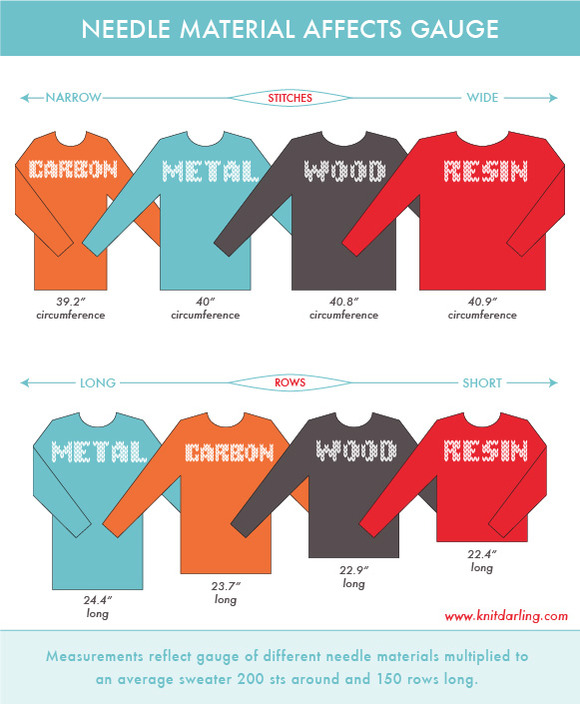 We’ve all heard it said that we need to learn from our mistakes and that is certainly true with knitting. So far my honeybee pattern has been fraught with errors and lots of tinking and ripping back, but finally I’ve got it where I want it. My plan is to complete the article of clothing even with the errors just to be sure about sizing. Then I’ll knit it again, hopefully without any errors. I’m a bit worried about the clarity of the bees. My hope is that the bees will show up better once the final piece has been blocked.

On another note those are pretty cool stitch markers, eh? Who doesn’t love Scrabble? Okay I don’t love it because my English degree husband always kicks my butt, but they do make for fun markers. 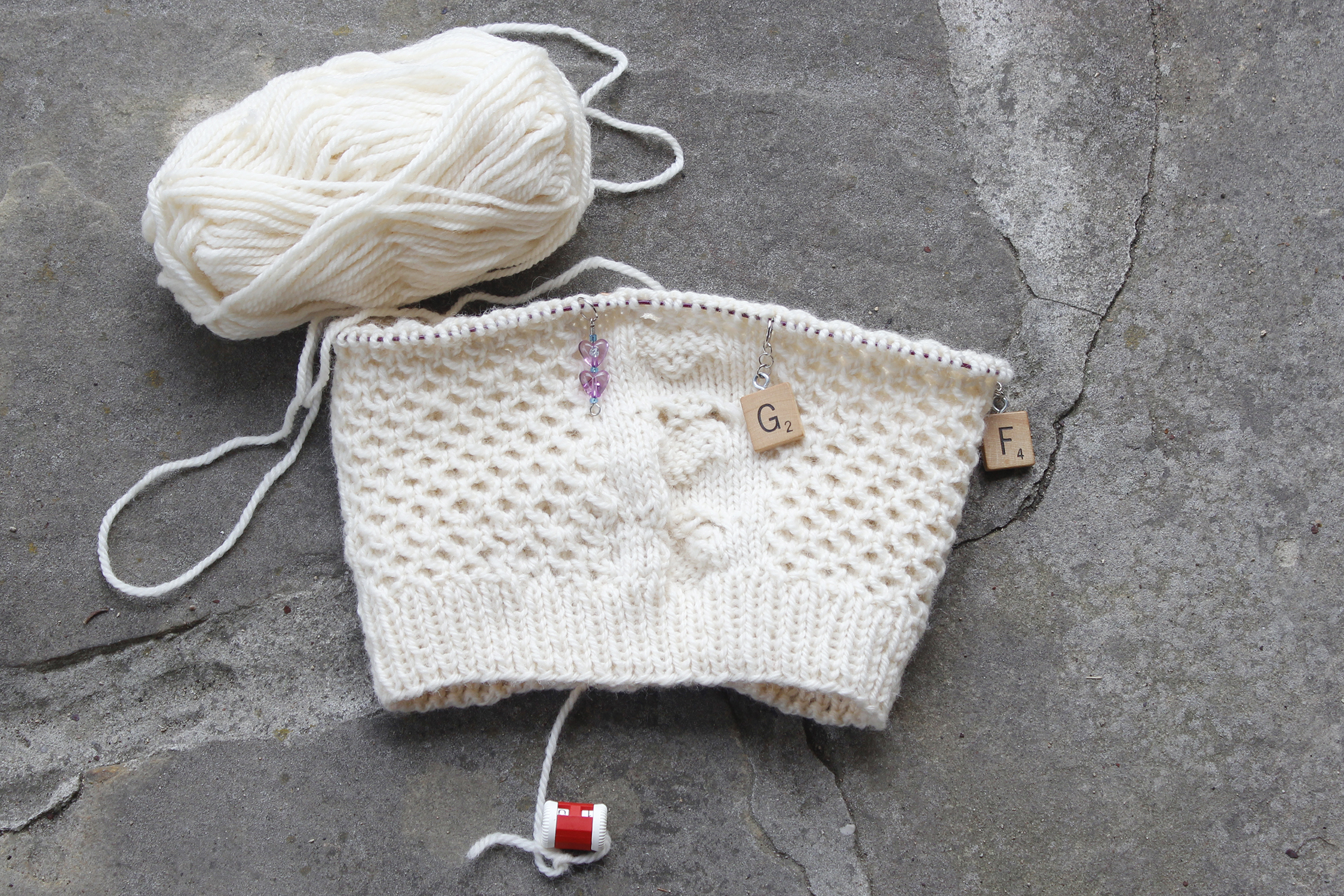 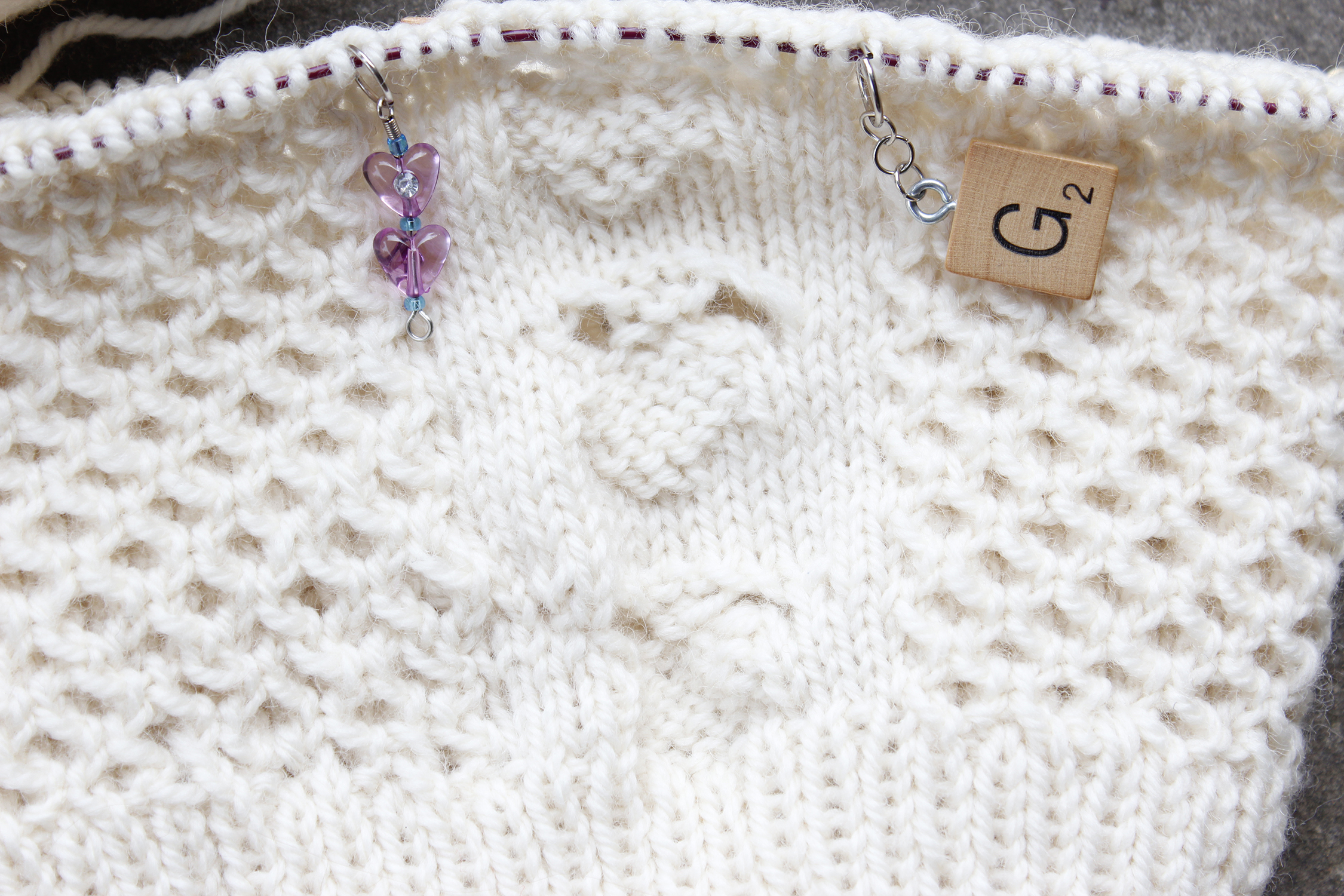