I finish baby Hannah’s sleeves (yes she was born on April 12). Fortunately the sweater is for 6 mos. so it’s not too late. Time to sew it together (ugh) and knit the neck band. The cute hands and feet in the package are the buttons. Due to a small error I will only be using 2. 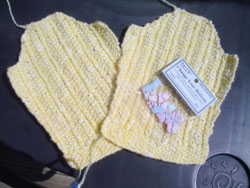 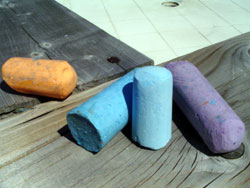 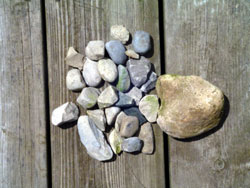 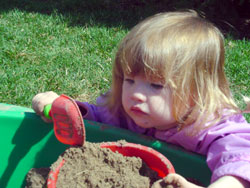 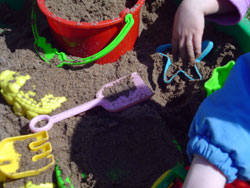 I have a job! I got and accepted a job offer this week. I’ll be working as a graphic designer for a company here in my city. I’m so happy. They offered the salary I needed/asked for. That was the sticking point. The job it’s self sounds perfect for me and the location is good. I had to worry about the money.

So in two weeks I get to blow the dust off of my work bag and get back at design and production. I’m happy and nervous. The girls will have to go to daycare – gulp. I’m not thinking about that too much. I think I’m going to have to work up my creative skills a bit by drawing again.

The awesome part is I’ll be taking the bus so I might get to knit on the way to work. The reason I say might is because the bus ride could be as short as 10 mins so that’s really not very long.

*Sorry about the language content. I censored as best I could. I copied and pasted this from my Live Journal where I write very frankly about things.

What a beautiful morning:

So I get up this morning do my usual thing, coffee, shower and feed the girls breakfast. One of the mom’s I do daycare for comes with her son. He decides he doesn’t want her to leave and fusses for a bit. As we are trying to settle him I notice my ‘neighbor’ from across the street coming across the road. That seems odd we don’t even know him.

“You f***in’ complain about my music at 3 o’clock on a Saturday afternoon and I have to listen to this s**t at 8 a.m”? A steroid fill man bullies his face into mine. His arms are almost as big as my waist sporting thorn tattoos. Ally clings to one of my legs while Mathew is suddenly quiet. Gwynn is nowhere to be found.

Patti and I exchange glances of shock.

“Excuse me?” I’m puzzled as I don’t hear anything. Then I realise I can hear some faint music coming from Patti’s car.
“My client is just dropping her son off at my daycare”.
“Well maybe you should tell your client to turn off her f***in’ music”.

Then as he begins to walk away a yelling match starts as he restates his complaint (in case I didn’t get it the first time). Of course I begin to lose it and let him know that this is ridiculous as his music last Saturday was so loud our windows were rattling.

“You wait for every Saturday afternoon” he threatens.
“Well I know your landlord, so we’ll see” is my response. His landlord happens to be one of the mom’s I do daycare for neighbor.

As you can guess I’m still shaking an hour later. Perhaps if dude was the equivalent of a UFC fighter I wouldn’t be so upset. Nothing to make you feel like a big man as bullying women and children. Pete has told me to go inside and lock the door if dude comes anywhere near me and to also tell him that I am going to call the police if he comes on the property. And then go the f**k in the house and call the police.

He was highly aggressive and looking for a fight. I was fearful when Pete went over and talked to buddy after I told him way happened. I’ve never really worried about Pete being physically threatened as he is a good sized man that I think most guys wouldn’t want to mess with. I knew this guy would be different. Fortunately Pete is very calm and good at preventing confrontation. We determined he has an I.Q. of 40.

Today is maybe the first time in my life I really wished I was a man. I’ve never felt so threatened before because I was smaller and weaker. Although it’s pretty obvious he would have treated me the same way if I had been a man. Except as a man if he had taken a swing I probably could have defended myself effectively. See my self defense method as a woman is first ‘just get the f**k away’. Avoid getting into a physical fight at all. Men are usually bigger and strong so for all my toughness I do realise my chances of winning are slim. Where the f**k is my big pointy stick?

I’m going to be busy over the next few weeks. I’ve added an other child to the daycare. He’ll be with us for about 8 weeks. So that means long days with 5 preschoolers in the house. Plus this is a big month for my Dad as he turns 60 and retires. Way to go Dad!!

I’ve barely done any knitting lately. I’ve been focusing on coming up with a name and a logo design for my web design and graphic arts company. The name is officially Quick Brown Fox. The logo is still on the drawing board but is coming along.

If I have any extra money (laughs) I would really like to purchase a knitting stitch library. If you know of any good books leave me a comment. Thanks.

Well I finally typed up the pattern and added it to my Free Patterns page. It’s too bad I didn’t get this up before winter finished, but at least it’s here for next winter. It’s a great way to knit up a custom set for any little boy or girl. Just pick two colors that match their winter coat and voila a great set to keep warm. 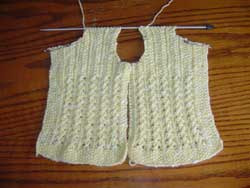 The front panels are almost done. It’s been slow going as I work a row here and there. I also got to the armhole shaping before I realised I’d forgotten to make a buttonhole. Instead of ripping it out I’ve just decided two buttons will have to do. I don’t think it’ll make much of a difference in the end. I like knitting up the front panels together, but you really need to pay attention to each step or mistakes can be made (like my missing buttonhole). When I knit from a pattern it’s a mistake when it’s my own design it’s a ‘design adjustment’.

I’ve been out learning to drive and finding it nerve racking. I need to be out on the road a lot and often to get over my fears. I’m excited by the idea of being able to drive, but I’m nervous about actually driving. So wish me luck and maybe stay off the road if you live in my area.