Normally this time of year it should be warming up, but for some reason mother nature has decided to prolong winter. Only a week ago it seemed like spring was here. It had been warm with a fair bit of rain and then on the weekend we had an ice and snow storm. It sucked big time. No-one left their house if they didn’t need to as the roads were ice rinks. The storm was worse than any of the storms we had during the winter. My girls had a snow day on Monday because of it – the only snow day they’ve had this year. It’s hard to believe that this time last year we were wearing short sleeves. Especially when it looks like this:

It needs to warms up so I can wear my Bertram tank top as soon as it’s done. I love the modular way it knits up. It’s something different from the usual way of making a sweater which makes it fun. I can’t wait to get to the next part of the pattern to see how it’s going to go together. The mitered square was cool to make, but I messed it up near the end. I ended ripping out several rows because, a few times I missed decreasing 2 stitches at the centre (I only decreased 1 stitch). The result of my error shifted the middle decreases over to one side and everything was off centre. If you decide to knit this pattern make sure to constantly check that you have an equal number of stitches on either side of your marker. It would have saved me a headache and a fair bit of swearing if I had been checking more often. Now that it’s fix it’s coming along nicely. 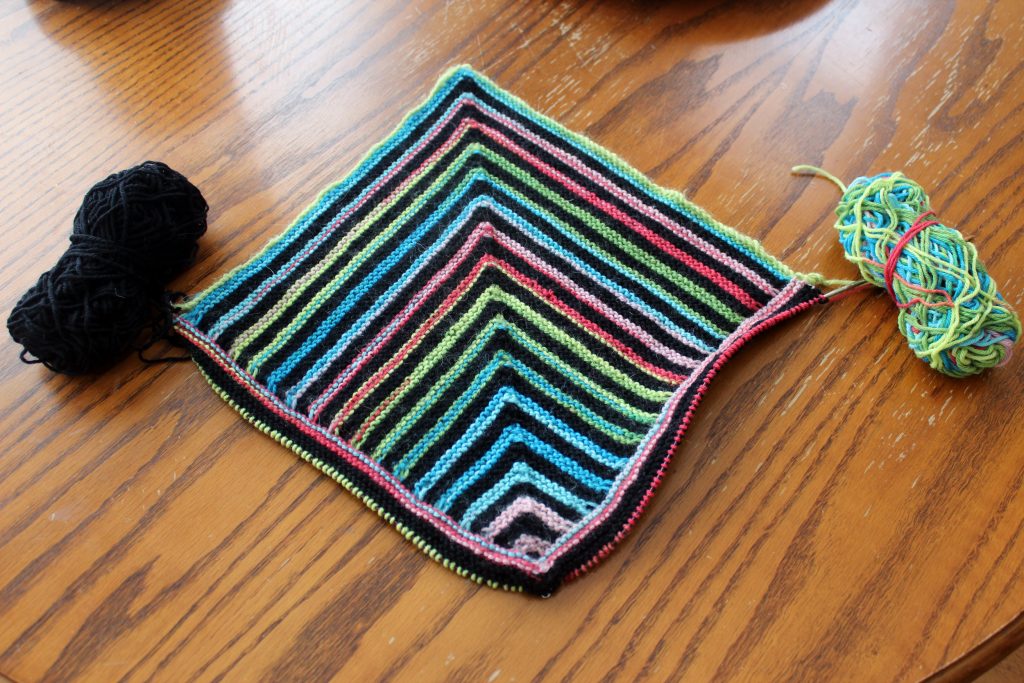 Yesterday I started a new project! It’s from Creative Knitting magazine called Bertram Tank. I’m excited about this one because I get to learn 2 new skills, mitered squares and provisional cast on. Provisional cast on is a method of cast on that you ‘unzip’ later on to give you an edge with live stitches which are picked up and knit. I love that the tank top is knit modularly making it more interesting to knit.

I wasn’t keen on the colours the designer choose – I look bad in yellow, so I decided to go with some very different colours. You can see them in the below photos. The first photo is my swatch and the crocheted chain for the provisional cast. The second is the chain again (you actually need two of these for the pattern). The third is the beginning of the cast on. The fourth is where I am on the tank top as of this morning. 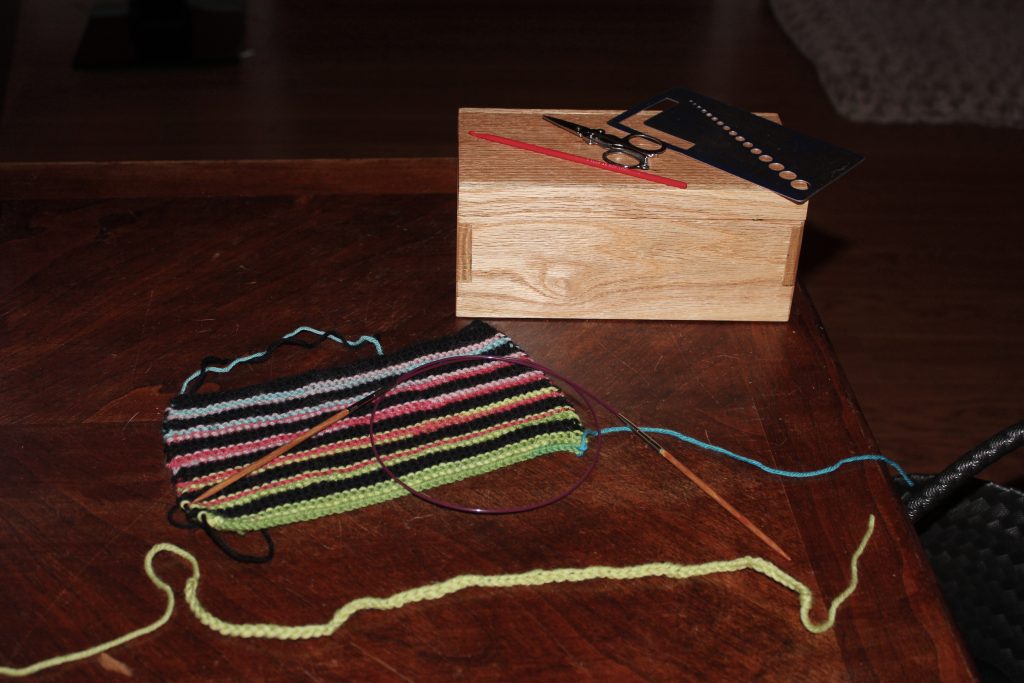 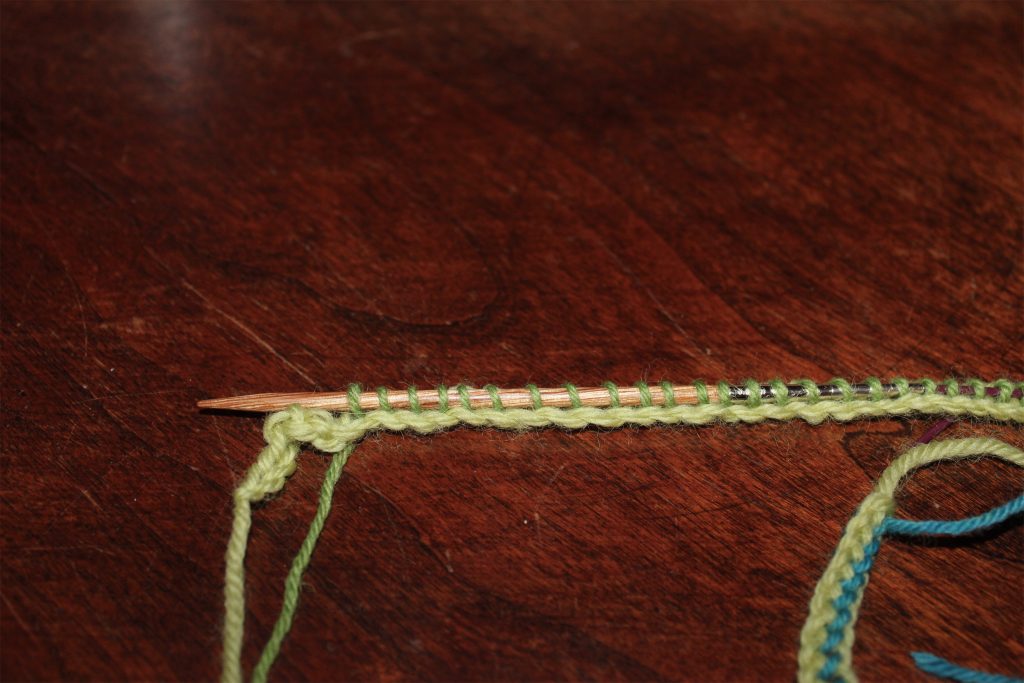 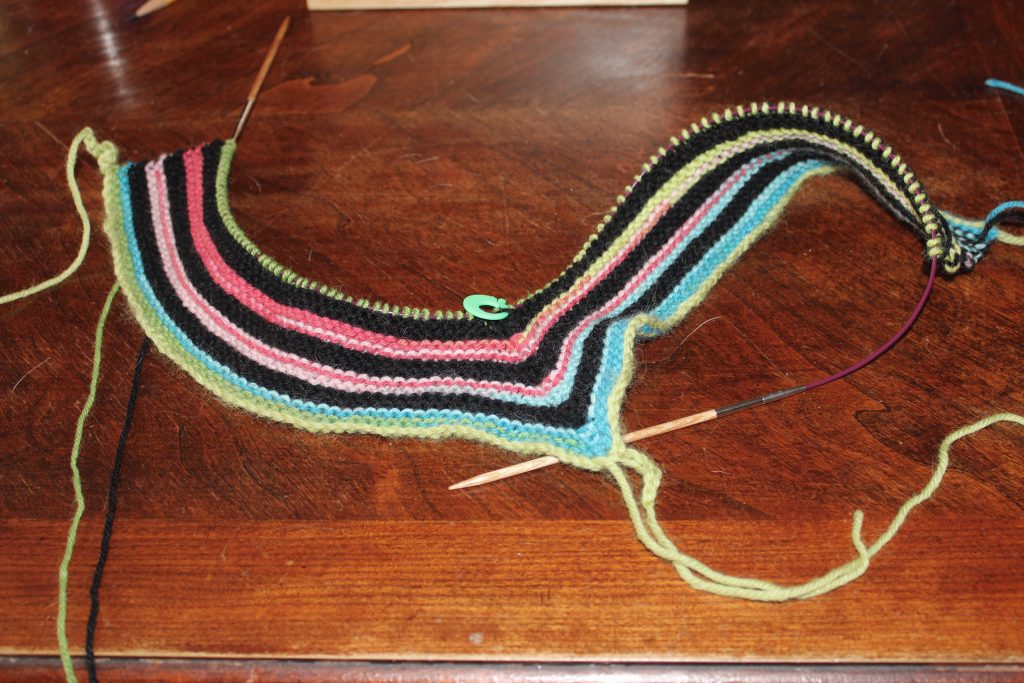