Okay I’ve come to realize that I’m just not into my red lace cardigan. I’ve made too many mistakes knitting it up and I keep putting it aside to do other things. The other night I actually knit a dish cloth instead of working on the red ‘thing’. I think I’m going to ditch the project and maybe re-visit my Celtic Sweater. It seems a bit of waste of all the knitting I’ve put in the project so far but I’m just not even liking the thing right now.

Well at least in the department of knitting. I’m still working on the red lace cardigan I started ages ago. I’m a few inches from the armholes. My biggest pet peeve about sweater patterns is how they tend to be too short so when I make my own pattern I always add an inch or two to the length. My cardigan is going to be 17 inches from the underarm to the hip not the usual 13 inches that I see so often. I’m not long waisted I just hate things sitting at the most unflattering area of my body, my stomach.

I hope to have some images once I start the armholes. I really want to get creating patterns again. Plus I need to think about Christmas gifts for people this year. Any suggestions on quick, nice Christmas gifts?

Here’s a little something other then knitting. I haven’t been knitting much the last week or so. I’ve been playing Guild Wars instead. Very bad I know, but sometimes a game helps clear my brain. 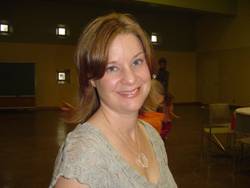 Here’s me at my in-laws 40th anniversary party.

And here’s little G just before we left for the party. This was the best I could do since she didn’t want her picture taken. 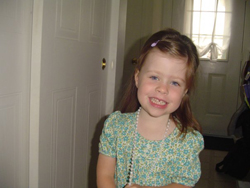 And here’s little A before the party. Unlike her sister she was more then willing to ham up for the camera.

I actually finished them last weekend, but I’ve been to busy to post or take pictures. I managed these two self-portraits – sorry they aren’t the greatest, but at least you can see them.

I did create a hem for the elastic which was the best decision I could have made. The p.j.s fit well and are very comfortable.

I would knit this again although now I know what yarn was used I’d substitute for a less expensive cotton. 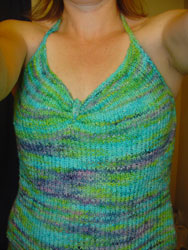 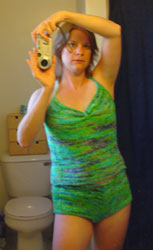