It’s been a whole week plus a day since I posted. This is not good. I guess I’ve been pretty busy getting everything together for little A’s 3rd birthday. Her party was a hit and everyone enjoyed themselves. We’re all quite tired now and the girls and daddy are playing a Dora game with bought for little A while I catch up on blogging and email.

Last blog entry I mentioned we had a babysitter and we were going to the movies. Well Murphy’s law felt otherwise. Big P ended up working until 3 a.m.! It sucked big time. We are re-scheduling our date for next Friday.

I don’t know about you, but I’m a big Halloween lover. We’re going to have a party again this year. I’ve decided to go as a pirate. I started looking around for costume ideas (I like putting something together on my own rather then buying a pre-made one) and found the majority of women’s pirate costumes to be of the slut variety. This would have been fine if I was still 25 yrs. old and hadn’t been through three pregnancies over a period of 3 years. Bare midrifts just don’t work for me.

After some looking I found these costumes which I’m going to try to loosely re-create. 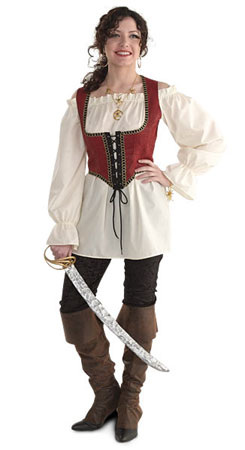 The second one is a bit more covered up in the cleavage area then the first. I don’t have a problem with cleavage (one thing actually improved by having babies). The trickest thing is the corset part. See I knit but I don’t even own a sewing machine. So it’ll be interesting to see how I solve this problem.

Speaking of knitting I’m almost done the sleeves. Finally no more mind numbing double-rib. Just a little sewing up and rib for the neck and I’m done. I hope to get it done by the end of the week. I want to be able to wear it when I go on my little trip in October for my 5th wedding anniversary. We’re going up north to stay in a little cabin at a resort. I can’t wait. I haven’t been away on a romantic get away since my first anniversary. We’re staying at the Shamrock Lodge in the Court House.